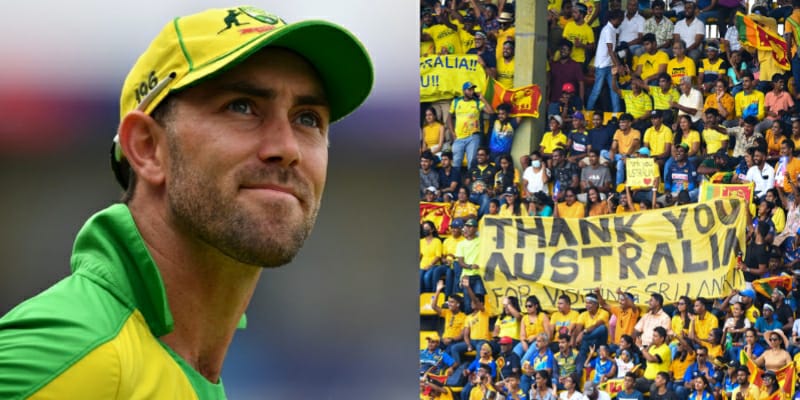 After losing the series to Sri Lanka, the Australian team received a standing ovation from the Colombo crowd for their consolation victory in the last ODI. The entire R Premadasa Stadium, which was full, rose to their feet to applaud Aaron Finch and his team.

The crowd was appreciative of the hard-fought cricket in the limited-overs series, and there were special greetings on special banners for the Australian cricket team.

With power outages, food shortages, and months of at times violent protests, Sri Lanka is currently experiencing its greatest financial crisis since gaining independence in 1948. However, a portion of the nation’s cricket supporters turned out to support the home team throughout all 8 of the games because the stadiums were electrified.

Notably, a social media campaign urging people to honor the visitors resulted in the Sri Lankan cricket fans wearing the Australian yellow and being photographed with the Australian flag.

After thousands of fans packed the R Premadasa Stadium in Colombo for the 5th ODI on Friday, June 24, Australia all-rounder Glenn Maxwell expressed gratitude to Sri Lankan cricket fans for their support during the limited-overs series to their country. Srilankan fans did this since their country is going through some tough times and the Australian cricket team came here to play and give some kind of entertainment.

Glenn Maxwell said after the match that, “A lot of times when Australia tours, we are generally the enemy and there is not many Australian fans in the stands.” He said it was a great feeling to see the opposition fans cheering for them and it was one of the most special feeling. Maxi also thanked all the fans who are all having Australian flags and wearing yellow jersey.

The scenes in Colombo after the fifth ODI were unreal and left Glenn Maxwell and the Aussies stunned as fans thanked them for touring 🥰 #SLvAUS pic.twitter.com/Xugt5KVmyX

Australia won the final ODI comfortably, but the series was won by the host Sri Lanka (3-2). They both will play a couple of Test matches starting from June 29th. Australia will look to win the test match series and gain some points in the World Test Championship.

“Ganguly invited me to IPL” – PCB Chairman Ramiz Raja reveals why he didn’t attend IPL games despite invitation
“He is ideal at No. 3”- Ravi Shastri names an IPL star for No. 3 in Indian XI for Ireland T20Is
To Top