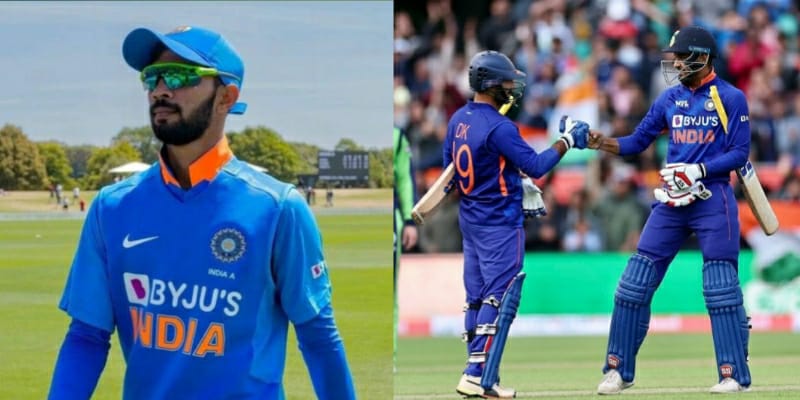 The two-match T20I series between Team India and Ireland got off to a victorious start on Sunday as the Hardik Pandya-led team defeated the hosts by seven wickets. India easily completed the 109 run target in 12 overs with seven wickets remaining and 16 balls remaining thanks to an unbeaten 47 from Deepak Hooda. However, everyone was taken aback when Hooda, not the intended opener Ruturaj Gaikwad, stepped out to play opposite Ishan Kishan.

Hardik, the captain, gave an explanation for why Ruturaj did not come out to open during a post-game virtual press conference. Hardik said, “Rutu had a niggle in his calf”. He also said that they had an opportunity to take risk and Ruturaj Gaikwad to open but he was not ready to take that risk. He said the player’s well being is the first which will be taken into consideration so they all went one spot higher and made sure not to take any chances with Ruturaj Gaikwad.

Talking about Umran Malik’s debut he said we have to give the time he needs and not to put pressure on the debut player is key. He is very happy for Umran Malik irrespective of the result. Furthermore, he said it’s a moment to cherish for him. He will be getting better and better when he gets to play more matches.

Harry Tector of Ireland was the bright spot for the hosts with the bat as he scored 64 runs off just 33 balls and contributed to Ireland’s total of 108 in 12 overs. Hardik also had something to say about him he said he played some fantastic shots and also he’s very young. Hardik also said that he will get contracts from all the league club’s around the world if he keeps hitting sixes.

With this T20I series against Ireland very crucial for Ruturaj Gaikwad he has to put in some performance with the bat in the second T20I to get a call up for the T20 World Cup later this year. But currently it looks like he is unlikely to get picked for the T20 World Cup.