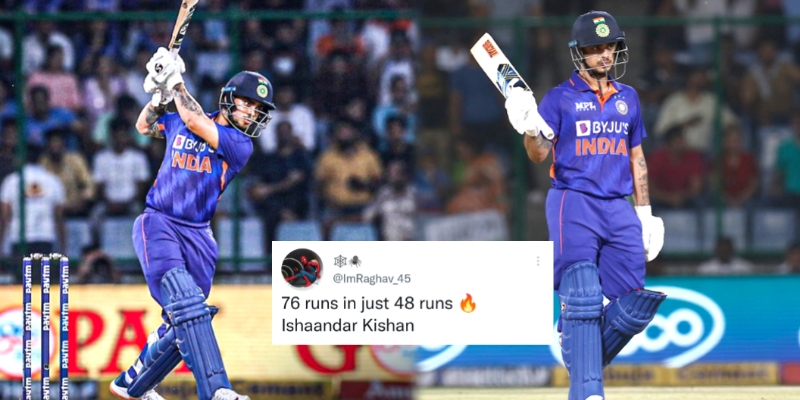 The first inning of the India vs South Africa 1st T20 International match has so far been dedicated to Ishan Kishan, who was at his best form tonight, smashing the South African bowlers before he was dismissed for a well made 76 runs.

The first of the scheduled 5 match T20 International series between India and South Africa is currently ongoing at the Arun Jaitley Stadium in Delhi.

Winning the toss at the Arun Jaitley Stadium in Delhi, South Africa skipper Temba Bavuma opted to bowl first. However, their dreams of a good start was completely shattered as Ishan Kishan displayed his brilliance with the bat.

While at the earlier it was a bit difficult for the Indian batsmen to settle in at the pitch and play the desire, however, the luck was by their side as India still managed 50 plus runs in the powerplay.

But, as they got settled in, Ishan Kishan showcased his true colours and started to blast the ball. The moment of the match was when he hit Keshav Maharaj for 20 runs in the first four balls of the over before getting out on the last ball of that same over.

However, even though he was dismissed for 76 runs, he won hearts of the Indian fans with his fire-hitting today.

Your Apology Should be as Louder as Your Disrespect Was .
KING ISHAN KISHAN pic.twitter.com/P9m71bbBsN

The real crime was judging Ishan Kishan form on the basis of IPL . clearly International form matters more than IPL

I supported Ishan Kishan when he was failing to score runs And Today I'm celebrating his knock ..