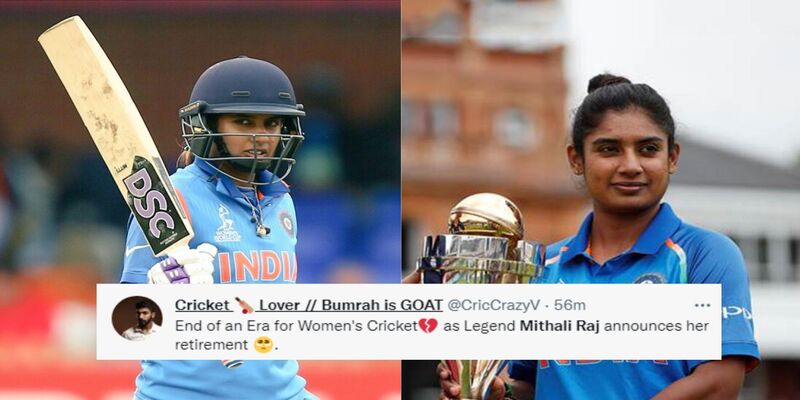 The former India women’s captain, Mithali Raj, has announced his retirement from international cricket. She confirmed the news through a statement on social media.

She made her debut for India as a 16-year-old in 1999. The former Indian skipper took giant strides in her career to become a legend in the game of cricket. In her 22-year-long career, she played 12 Test matches, 232 ODI games and 89 T20 internationals. She also led the Indian women’s team to the finals of the ODI World Cup twice, in 2005 and 2017.

Thank you for all your love & support over the years!
I look forward to my 2nd innings with your blessing and support. pic.twitter.com/OkPUICcU4u

Mithali announced herself in ODI cricket with a century in her debut match. She is the highest run-scorer in women’s ODI cricket. Mithali has scored 7805 runs in 232 games, including seven centuries and 64 half centuries. Speaking of his Test career, she is the only Indian women’s cricketer to score a double hundred in the red-ball format. She scored her career best of 214 against England in 2002, which is also the second highest score by any women cricketer in the world.

It will not be a wrong statement to say that she has dominated in women’s cricket for over two decades. She is the role model of many Indian and other female cricketers across the globe. It is a big decision to announce a retirement from the cricketing world. She also holds the record of winning the most matches as a captain.

As a captain in ODIs, she has won 89 matches out of 155 matches. Many ex-cricketers and fans also congratulated her for her career and wished her good luck for her next innings.

A wonderful career comes to an end! Thank you @M_Raj03 for your immense contribution to Indian cricket. Your leadership on the field has brought much glory to the National women's team. Congratulations for an illustrious innings on the field and best wishes for your next innings!

Even though you know this day is coming, you can’t help but feel a little sad 😔. An amazing player that put cricket on the map especially in 🇮🇳 Loved playing against you & enjoyed watching you adapt your game to keep up with all these youngsters. Enjoy the next phase Mithali xx https://t.co/QIK9nE1Vdo

Happy retirement legend. You have set an example for women not only in our country but around the world. Best wishes for your 2nd innings! https://t.co/D8SZgwCYxq