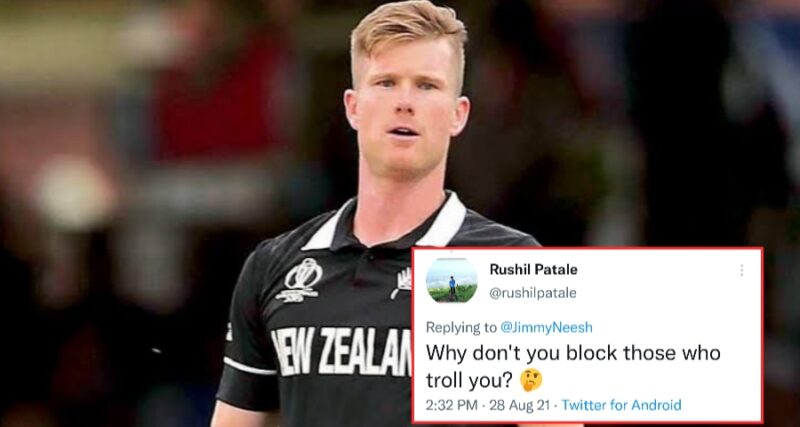 Jimmy Neesham is quite active on Twitter and is often known for his cheeky tweets. Neesham has established a reputation for himself by posting amusing tweets that supporters have positively welcomed. He spends his time on social media teasing admirers and trolls equally when he’s not on the ground.

The New Zealand all-rounder has had to contend with many trolls, and he explained how he handles them on Twitter.

Neesham initiated the discussion by retweeting a Jonny Bairstow post from ESPNcricinfo. Bairstow is pictured carrying a balloon ahead of the fourth Test between England and India at Headingley. Neesham’s statement drew a troll’s retort, sparking a barrage of tweets.

Neesham’s comment read, “Coincidentally, that’s what the white ball actually looks like to @jbairstow21.” A Twitter user replied to this by trolling the New Zealand all-rounder. “And when you burst it, that what it looks like to you in any format? Difficult to spot!” said the Twitter user.

The conversation elated with Neesham sarcastically replying to that user. “It was a decent effort but Nah,” said Neesham.

Another person replied to Neesham, saying, “Why don’t you block those who troll you?” Neesham then shared a screenshot of his account, which revealed the volume of accounts that had been disabled or muted. A total of 515 accounts were blocked, with a startling 1447 accounts being muted.

Another user then inquired how he identifies between those who to be muted and whom to be blocked. The Blackcaps star remarked that he does it based on the degree of hate he has for a specific person.

He also stated that he had muted many phrases, with one user assuming that one of the prohibited terms is ‘Super Over.’ The Kiwi all-rounder will play for Mumbai Indians in IPL 2021 next month.