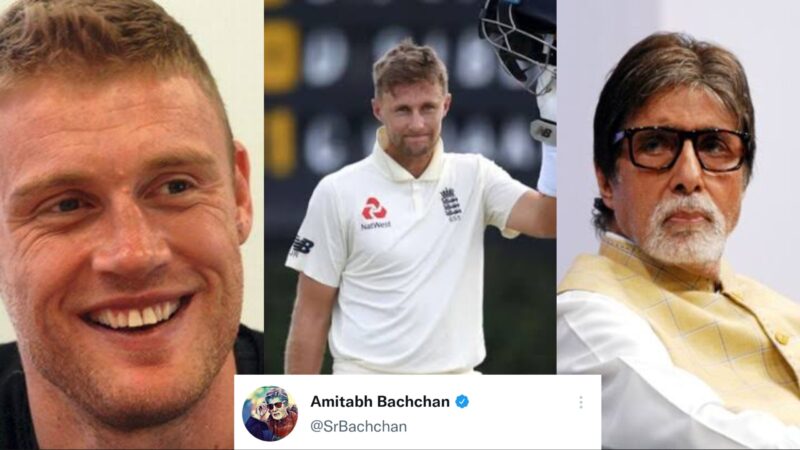 England captain Joe Root has been in unbelievable touch this year. After performing exceptionally well with the willow in the subcontinent, Root has continued his fine at home. The right-handed batsman registered his third century of the series against the Indian cricket team yesterday at Headingley.

Joe has been unstoppable against the Indian cricket team. Although India are 1-0 ahead in the series, no one can deny the fact that Root has been the best player among both teams in this Test series so far. Now that the English skipper is performing so well, an old tweet by famous Bollywood actor Amitabh Bachchan has been going viral on the micro-blogging platform.

Back in 2016, during the ICC T20 World Cup event, former England cricket team all-rounder Andrew Flintoff had commented on Virat Kohli’s performances. Here’s what Flintoff had to say back then:

“At this rate Virat Kohli will be as good as Joe Root one day ! Not sure who England will meet in the final now !”

Soon, Amitabh Bachchan gave a reply to the England captain. Here’s what the Bollywood Superstar wrote:

“With the greatest respect, this aged well,” Flintoff replied.

With the greatest respect , this aged well 😂 https://t.co/sjhs7HGT1d

Now that the England cricket team captain Joe Root has been performing so well against the Indian cricket team, many fans have responded to the five year old tweet by Amitabh Bachchan.

What Are The Earpieces That Fans In The Stadium Are Wearing In England?
R Ashwin hilariously reacts to Jarvo invading pitch in IND v ENG Test
To Top