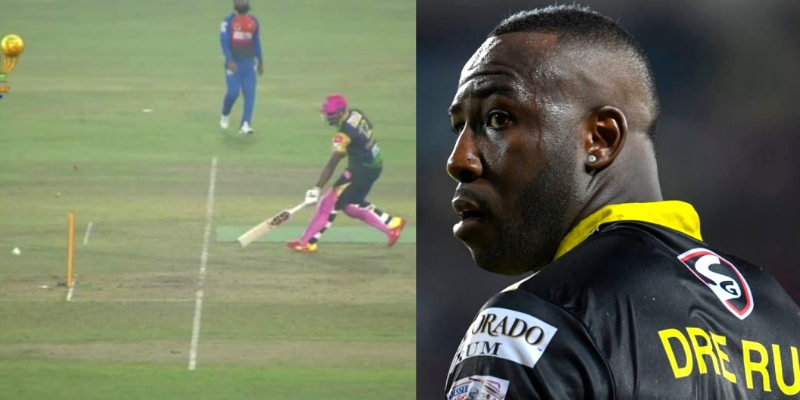 West Indies all-rounder Andre Russell, who is currently playing for the Minister Group Dhaka in the ongoing Bangladesh Premier League, was at the end of the most bizzare run out ever in cricket’s history.

The 8th of edition of Bangladesh’s franchise league cricket Bangladesh Premier League (BPL) is currently underway and it witnessed one of the most strangest run-out ever in cricket’s history.

The whole incident took place during the 1st inning of the 2nd match of the BPL 2022 played between Khulna Tigers and Minister Group Dhaka.

It was during the last ball of the 15th over of Minister Group Dhaka’s inning when West Indies all-rounder Andre Russell played a grounded shot towards the third man, who then threw ball towards wicketkeepers end where Mahmudullah was running, but when the ball hit the stump, he was safely in, but the ball instead hit the stumps on the other end where Andre Russell was running.

Russell got out in the most bizarre way ever 😭😭😭Throw was aimed at Mahmudullah’s end, he was safe, but it rebounded to the other end and Russell was short of his ground 😭 pic.twitter.com/ks8v1PYeYu

It was a lazy run by Russell who was trying to figure out what is going on the other end with his teammate Mahmudullah, but he was safe, but Russell fell pray to it.

This was probably the most crazy and bizzare run-out ever in cricket’s history and Andre Russell might gutted with that.

Talking about the match, Khulna Tigers won the toss and opted to bowl. Minister Group Dhaka put up 183 runs on the board for the loss of 6 wickets after a fifty from Tamim Iqbal, while we saw a destructive batting from Afghanistan‘s Mohammad Shahzad (42 runs of 27 balls).

The finishing touch to the inning was given by captain Mahmudullah, who scored quickfire 39 runs from 20 balls at a strike rate of 195. Khulna Tigers requires 184 runs to win the match.