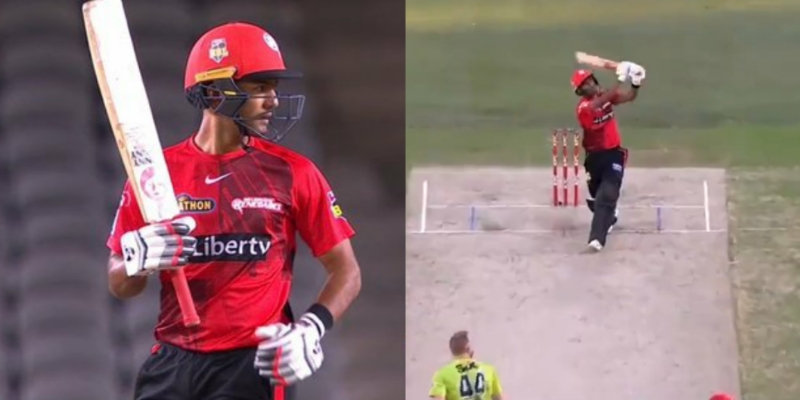 Former India U19 skipper Unmukt Chand showcased some 6 hitting master class batting as he signed off from his first season in the Big Bash League, the Australian domestic cricket league.

He was signed up by the Melbourne Renegades for the season. As per BCCI rules and restrictions, no Indian players are allowed to participate in any other T20 leagues other than Indian domestic league.

Even though he was a superstar from the India U19 batch from the year 2012, he could realise his potential and never got to his best, and even was ignored by the IPL franchises as well. As a reason of which, he decided to retire from Indian cricket, so that he can participate in other leagues.

Chand was picked up the Melbourne Renegades for the Big Bash League (BBL) 2021-2022 season. But missed out from the most of the matches, and got to make his debut only the 2nd last match of their campaign, where he could only score 6 runs.

However, he bid adie to the Big Bash League by giving a statement and putting teams from other league in notice. He scored 29 runs in Renegades last match of the campaign, and smashed 2 big sixes, proving his worth.

Unmukt took some time out post a compilation video of his career in the Big Bash League.

As for Melbourne Renegades, they didn’t had a good season at all, who only managed 3 wins and lost 10 times, 1 match ended in no result, as a result which, Aaron Finch‘s side will finish at the bottom of the league table.

It’s been a dream come true 2 play at the @MCG. Felt a childlike energy entering the G. Not the result we wanted, nonetheless, a gud outing. Hopefully can take a lot of +ves frm this & apply on my nxt & coming adventures. Feels good 2 be back on the big stage. @BBL @RenegadesBBL pic.twitter.com/FHLEjKGXyu

Watch: Stuart Broad yells at Rover Robot for Disturbing his run-up in 5th Ashes Test
Andre Russell gets run-out in the most bizzare fashion during Bangladesh Premier League match
To Top