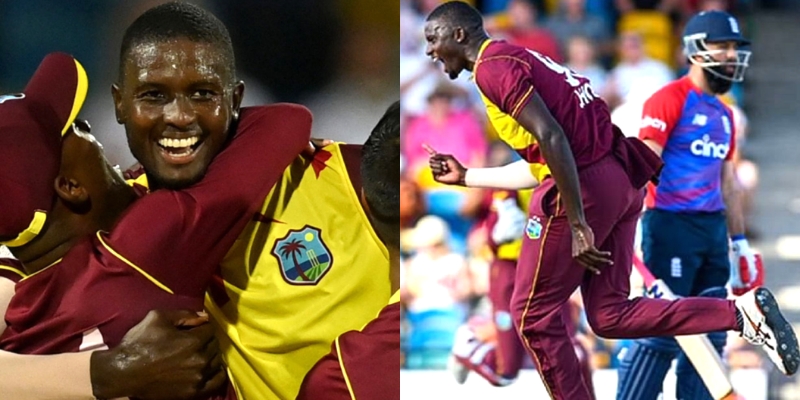 An entertaining series between hosts West Indies and England was decided on the last match of the series, where the Caribbean side came out infront, all thanks to a hat-trick from Jason Holder, who also went on to convert that to four wickets in four balls.

Going into the fifth T20I match between the sides at the Kensington Oval in Barbados, both teams were tied with 2 wins each after four matches of the series.

West Indies bowlers were in fire as they dismissed the England side for 162 runs after setting a target of 180 for them, all thanks to some cracking batting down the order from Kieron Pollard and Rovman Powell.

Winning the toss, West Indies skipper Kieron Pollard went with bat first. 29-years-old Kyle Myers gave the Caribbean side a good start as he scored 31 runs from 19 balls with 3 fours and 2 sixes.

Brandon King added 34 runs before was dismissed by Liam Livingstone. But the real action came from down the order when captain Kieron Pollard and Rovman Powell took control of the inning and showcased some solid pitch-hitting.

Pollard scored 41 runs from 25 balls. But it was Rovman Powell who went crazy. The 28-year-old all-rounder smashed 35 runs from 17 balls that included 4 sixes with a strike rate of 205.88. 2 wickets each for Adil Rashid and Liam Livingstone.

England endured wickets everytime they looked to have setup something. They lost 2 wickets in the powerplay, before Moeen Ali and James Vince added a 40 plus partnership, but Ali was soon after that, as England were reduced to 3 wickets for 86 runs.

They were soon down 6 wicket by the time they reach 119 runs. There after, Sam Billings and Chris Jordan built a strong partnership which took them close to victory, but there was still a lot of work to do.

England still required 20 runs to win in the final over with both Billings and Jordan at the crease. But, that’s when Jason Holder magic began, as the Windies all-rounder took 4 wickets in 4 balls to also complete his hat-trick.

With that, West Indies picked up a 17 runs win over the England side, to also win the 5 match series 3-2.

Jason Holder has now become only the fourth bowler to take 4 wickets in four balls in any T20 International competitive match. The other three being Lasith Malinga, Rashid Khan and Ireland’s Curtis Campher.

Andre Russell gets run-out in the most bizzare fashion during Bangladesh Premier League match
Watch: Virat Kohli assist Rohit Sharma with DRS Review in the First ODI vs West Indies
To Top