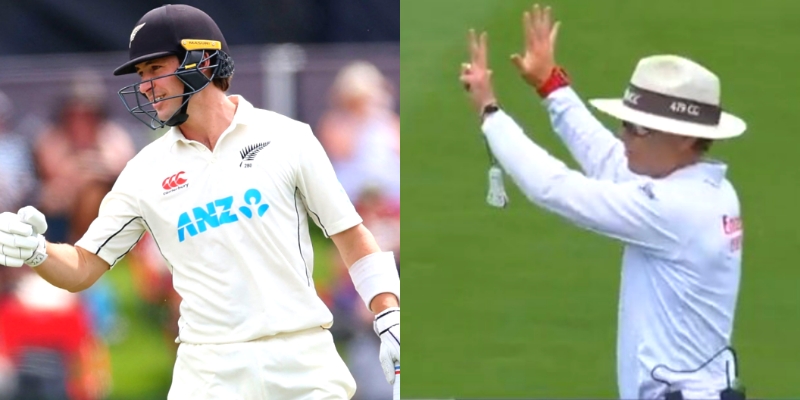 The 2nd Test match between New Zealand and Bangladesh began today at the Hagley Oval in Christchurch, with Bangladesh leading the series after recording a historic win in the 1st Test.

The Bangladesh cricket team is currently on a tour to New Zealand, where they are facing off the hosts in 2 Test match series as part of the World Test Championship 2021-2023 circle.

In what is a most bizarre scene in Test cricket, New Zealand’s opening batsman was handed a life-life and then comedy of errors lead to seven runs of the very same ball.

Will Young Scores 7 Runs off a Ball

The incident occurred during the first over of the 2nd session of New Zealand’s inning on Day 2 after the Lunch Break.

Bangladesh pacer Ebadot Hossain’s ball took a nick of New Zealand opening batsman Will Young, but the catch was dropped down by the fielder in 2nd slip.

The ball then went behind wicketkeeper. It was thrown back towards the keeper from the boundary line, but a Bangladeshi fielder caught the ball and threw it towards non-strikers end and no was ready there to receive the ball.

Will Young got a life and 7 runs in a single ball. pic.twitter.com/PArHrm39nx

The ball went rumbling towards the boundary line and bowler Ebadot Hossain gave it a chase but couldn’t stop it from crossing the boundary line. Before that, Young had already ran three runs and adding the boundary, Young got an unprecedented record to his name of scoring 7 runs off a ball in Test cricket.

Talking about the match, Bangladesh won the toss and opted to bowl first. Both Tom Latham and Will Young gave the Kiwis the great start scoring 148 runs for the 1st wicket before the Will Young was eventually dismissed by Shoriful Islam for 54 runs.

As of writing this, New Zealand have scored 288 runs from 76 overs, with Tom Latham unbeaten for 166 runs, and is being accompanied by Devon Conway, who himself has scored 63 runs.