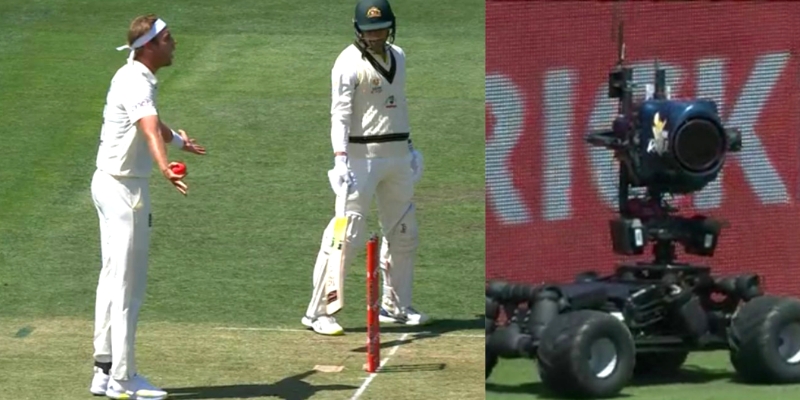 The 5th and the final Test match of the 5 match Ashes Test is currently on at the Bellerive Oval in Hobart. And during the Day 2’s play, a funny incident occurred when Stuart Broad was heard screaming at the Rover Robot for moving while his run-up.

Australia are currently leading the Ashes 3-0 after four matches as England managed to draw the 4th match. Even though England have lost the series, they are looking for atleast to win a match.

England bowlers did quite well to restrict Australia to just 303 runs in their first inning, all thanks to a brilliant bowling display form the Three Lions.

During their inning, a funny incident happened as England’s legendary pacer Stuart Broad was seen and heard screaming at the host broadcaster Fox Sports’ rover robot moving behind the batsman.

It was during the last of the 63 over when Stuart Broad stopped his run-up near the non-strike end stumps and screamed “Stop moving the robot”, trying to send the message to Fox Sports.

Not a fan of the @FoxCricket rover, then? 🤖#Ashes pic.twitter.com/1ctxyHdVC7

What is a Rover Robot ?

Travis Head‘s century and Cameron Green’s 74 guided the Australian side to 303 runs before they were dismissed in the 75.4 overs. 3 wickets each for Stuart Broad and Mark Wood while Chris Woakes and Ollie Robinson got 2 wickets each.

As of writing this, England have scored 70 runs and have lost 2 wickets in response to Australia. Dawid Malan and skipper Joe Root are currently on the pitch for England.

Watch: Will Young Scores 7 Runs off a Ball after Comedy of Errors by Bangladeshi Fielders
Watch: Former India U19 skipper Unmukt Chand showcases 6 hitting master class during last match in BBL
To Top