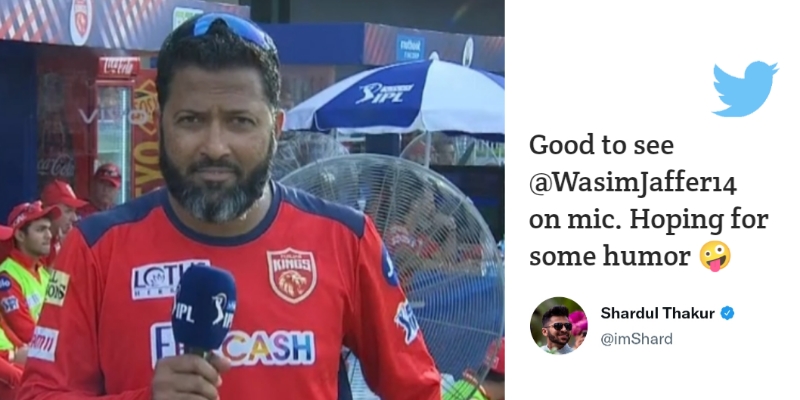 Chennai Super Kings all-rounder Shardul Thakur has been a match-winner for his franchise in the 2021 edition of the Indian Premier League. After performing well for the Indian cricket team, Shardul has continued his fine form in the yellow jersey as well. The right-arm pacer has made it a habit to pick up wickets at regular intervals. On top of that, Shardul has made a name for himself by dismissing the top guns of the opposition team.

Recently, Shardul Thakur posted a tweet on his official Twitter handle, marking an end to his two month long inactivity when it comes to tweeting. The CSK star posted a tweet about none other than the batting coach of the Punjab Kings team, Wasim Jaffer. Thakur clicked a photo of his TV screen while watching the match between the Royal Challengers Bangalore and the Punjab Kings in the 2021 edition of the Indian Premier League.

He clicked the photo while the batting coach of the Punjab Kings team, Wasim Jaffer was speaking with the commentator on air. Here’s how Thakur captioned the post:

“Good to see @WasimJaffer14 on mic. Hoping for some humor.”

I got Lord Shardul Thakur to tweet after 2 months: Wasim Jaffer

The batting coach of the Punjab Kings team, Wasim Jaffer has become very popular because of his sense of humor. He often shares hilarious memes on his official Twitter account. Reacting to the tweet by Shardul, Wasim wrote:

“I got Lord Shardul to tweet after 2 months! Where’s my reward @jack ?”

I got Lord Shardul to tweet after 2 months! Where’s my reward @jack?😉 https://t.co/8GkZQ4fT5m

This tweet from Wasim Jaffer has gone viral on the micro-blogging platform, gaining more than 14,000 likes. Close to 500 fans have retweeted it as well. Without a doubt, Jaffer has proven himself as the king of Indian cricket Twitter.