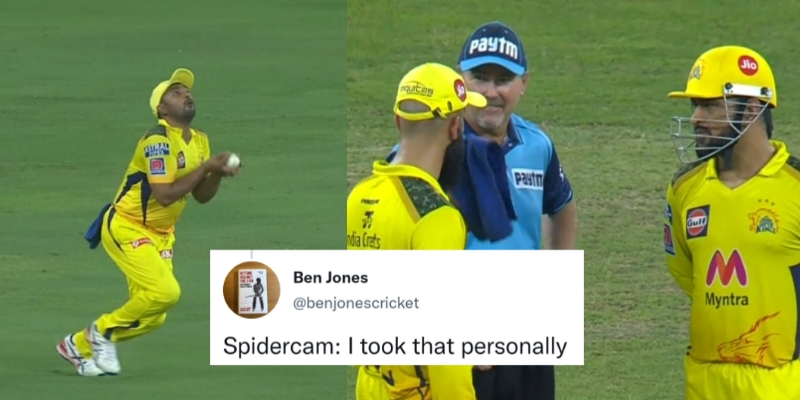 Spidercam is an important part of the broadcasting world. In cricket matches, the it is helpful in giving the fans watching the match on TV different and attractive views of the live action. However, when the batters take the aerial route and try to clear the boundary, it happens sometimes that the ball touches the spidercam.

A similar incident happened during the final match of the 2021 edition of the Indian Premier League when a ball smashed by Shubman Gill hit on the spidercam cable before landing in fielder Ambati Rayudu’s hands. While the Chennai Super Kings claimed a wicket, the third umpire pointed out that the ball had touched the spidercam cable before Rayudu took the catch. Thus, the ball was declared dead and Shubman Gill received a chance to continue his knock.

While Gill lost his wicket soon after, it would have been a game-changing incident had the Kolkata Knight Riders batter managed to score big and eventually guide his team to the trophy. Luckily for the Chennai Super Kings team, the same did not happen. Gill departed to the dressing room after breaching the 50-run mark.

How Twitter reacted to the Spidercam incident in IPL 2021 final

The Shubman Gill incident was one of the biggest talking points from the match, and here are the top Twitter reactions to that incident from the final match of the 2021 edition of the Indian Premier League featuring the Kolkata Knight Riders and the Chennai Super Kings.

#Dhoni has never been a fan of #SpiderCam

KKR fans looking for the spidercam every wicket 😂#IPLFinal

#DelhiCapitals didn’t qualify for the final but Pant is still making his impact via the spider cam.#IPLFinal #CSKvsKKR #SpiderCam #SpiderManPant

Dead ball on a catch 🙂