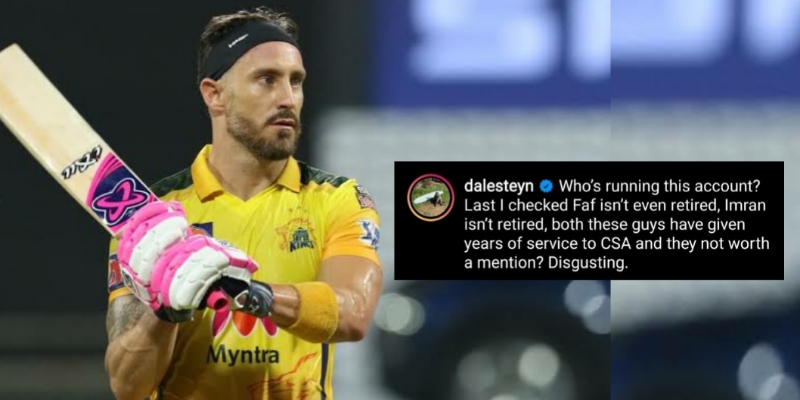 Faf du Plessis performed exceptionally well for the Chennai Super Kings team as he scored 86 runs and bagged the Player of the Match award for his match-winning performance. The right-handed batter smashed seven boundaries and three maximums in his 59-ball knock that helped the Chennai Super Kings team become the champions of the 2021 edition of the Indian Premier League.

All fans of the Chennai Super Kings team lauded Faf du Plessis for his magnificent performance in the final match of the 2021 edition of the Indian Premier League. However, Cricket South Africa ignored him and congratulated only Lungi Ngidi for winning the IPL trophy in a now-deleted post. Faf soon reacted to that post and wrote – “Really?”. Even Dale Steyn made the following comment:

“Who’s running this account? he wrote. “Last I checked Faf isn’t even retired, Imran isn’t retired, both these guys have given years of service to CSA and they not worth a mention? Disgusting.”

Do the right thing: Dale Steyn sends a message to CSA after they ignored Faf du Plessis and Imran Tahir

“CSA now blocked the comments section. Here’s some advice. Do the right thing. Delete the post and add all the men involved, save yourself the embarrassment and ridicule.“