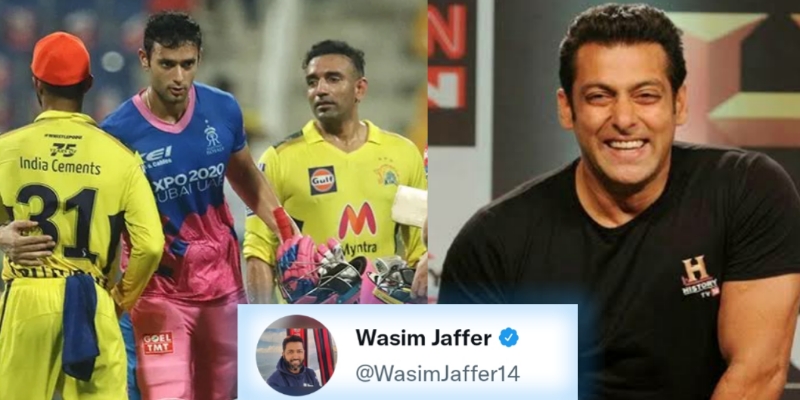 After a series of low-scoring games in UAE, the Indian Premier League finally produced a high-scoring game on Saturday. A total of close to around 400 runs were scored in the fixture between Chennai Super Kings and Rajasthan Royals in Abu Dhabi. In this article, we take a look as former cricketer Wasim Jaffer hilariously reacts to the CSK-RR game by using an old Salman Khan tweet today.

A high-scoring game in UAE

Chennai Super Kings batted first, and although they started slowly, it was a run-fest in the middle-overs and then at the death. Much of it was orchestrated by young opener Ruturaj Gaikwad. He got to his maiden IPL century in the encounter. Ruturaj scored a total of five sixes and nine boundaries in his knock. At the death, Ravindra Jadeja too joined the party with 32 runs in 15 deliveries.

Rajasthan Royals sprung a surprise with the way they started in their chase. They were off to a terrific start as Evin Lewis made 27 runs off 12 balls while Yashasvi Jaiswal scored 50 in 21 deliveries. The duo scored more than 70 runs within the powerplay and made the job easy for the other batsman. Shivam Dube, too, struck a few lusty blows as RR chased the target of 190 with 15 balls to spare.

Wasim Jaffer hilariously reacts to the CSK-RR game in UAE

Wasim Jaffer is known for his hilarious Tweets. With the IPL finally producing a high-scoring game, he came out with a humorous post.

Jaffer took reference to an old tweet by Bollywood actor Salman Khan to put across his point. Salman’s tweet made on May 20th in 2010 was probably about an action sequence. Jaffer hilariously connected it to the game between CSK and RR, which had plenty of huge hits out of the park.