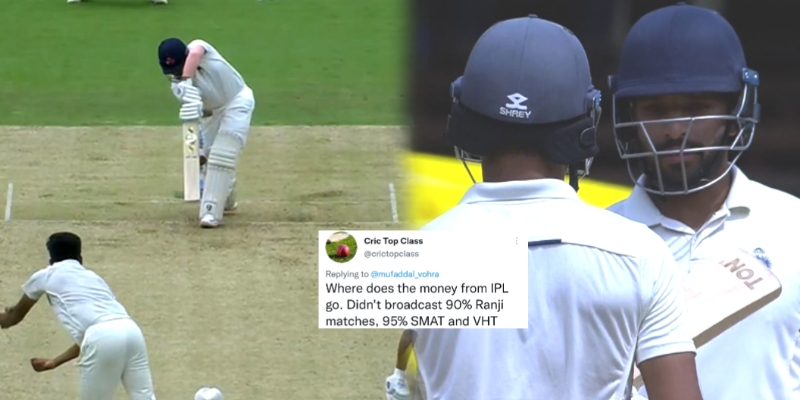 The absence of the Decision Review System (DRS) in the final match of the Ranji Trophy being played between Mumbai and Madhya Pradesh has created quite a eruption on social media.

The Ranji Trophy 2021-2022 season’s final match is currently being played between most successful team in the competition, Mumbai and Madhya Pradesh, who are appearing in the final for the first time after 32 years.

A report earlier today on Times of India confirmed that the Ranji Trophy final is completely gonna be played without the DRS system available to challenge the umpire’s decision.

An unnamed official reportedly told Times of India that they have complete faith in the umpires and that doesn’t it is expensive to excise the use of DRS.

Currently the third day’s play is on and it seems going towards a quite a good finish. Thanks to a brilliant hundred from in-form batsman Sarfaraz Khan, Mumbai scored 374 runs. Madhya Pradesh is currently fighting their total and has scored 308 runs after 100 overs, as of writing this.

But, absence of DRS has led to many question the BCCI’s decision. Check-out how Twitter reacted to the whole scenario.

The BCCI didn’t have DRS in the Ranji Trophy Final because it’s too expensive. (Reported by TOI).

Abolute disgrace when all boards are using DRS for every single FC game, BCCI can’t use it when it costs just 2.5 crore per FC game and Ranji is watched by millions.

Money means you spend it anywhere without logistical consideration, which is what BCCI must understand. https://t.co/ULpNDCixf3

No DRS in Ranji Trophy because it is expensive – BCCI pic.twitter.com/6VD7xMahec

Where does the money from IPL go. Didn’t broadcast 90% Ranji matches, 95% SMAT and VHT matches and 100% Senior Women’s ODI and T20 Trophy and now not even having review in Ranji Trophy Final. Totally disappointed as a cricket fan @BCCI @SGanguly99 @JayShah

What will they do with money they get from IPL if not use it to improve domestic cricket? 🤦‍♂️