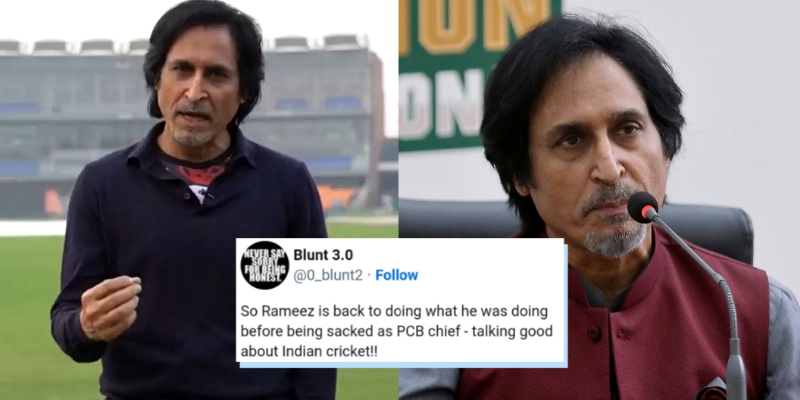 There was much controversy between the Indian cricket, BCCI and the Pakistan Cricket Board, especially chairman Ramiz Raja, who was annoyed by the BCCI’s decision to not travel to Pakistan to play the Asia Cup 2023.

Ramiz Raja further fuelled the controversy when he said that if India doesn’t play Asia Cup 2023 in Pakistan, then also Pakistan won’t travel to India to play the ICC Cricket World Cup 2023.

But, now there has been a change and Ramiz Raja is now out of PCB’s office. And after criticising all those time, he is now back in his YouTube channel and has once again started praising Indian cricket. After he talked about comparing youngster Rohit Sharma and Shubman Gill, the Twitterati poked him.

Ramiz Raja said, "Shubman Gill looks like a mini Rohit Sharma. He has extra time and looks good. He has enough potential".

Is he the same Ramiz Raza who talking ill abt BCCI 😬

So Rameez is back to doing what he was doing before being sacked as PCB chief – talking good about Indian cricket!!

Don’t fall in his trap remember when he was PCB head he always talk against INDIA and now on his utube channel he suddenly start praising Indian players!!

“We bought ticket to only watch him play, we will boycott if he doesn’t play” – Twitter reacts as Ravi Shastri suggests Virat Kohli to skip 3rd ODI vs New Zealand to play Ranji Trophy before Test series against Australia

“The question is who should be dropped for him” – Twitter reacts after Sunil Gavaskar lashes out on selectors urging for his selection, adding “they should go to fashion show and select some models if they are looking for slim guys”