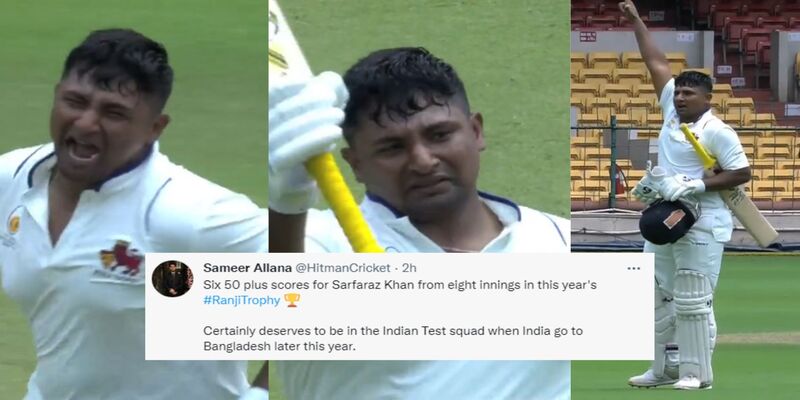 The final of the Ranji Trophy 2021-22 is underway between Mumbai and Madhya Pradesh at M. Chinnaswamy Stadium, Bengaluru. After winning the toss, the Mumbai skipper, Prithvi Shaw, chose to bat first, and Mumbai are looking to get a big first innings score. However, after a brilliant knock by the in-form opener Yashavi Jaiswal on the first day, Sarfaraz Khan has taken the charge on second day.

Jaiswal scored yet another 50+ score as he made 78 runs. Sarfaraz, who brought up his third century of the season, is also the leading run-scorer in the tournament. Mumbai has crossed the 350-run mark with the loss of eight wickets and is looking to get a big first innings total.

Safaraz Khan, who has been in the form of his life, is scoring runs in every match. In just five matches, he has scored over 800 runs, including three centuries and a high score of 275 runs. And it looks like he is going on to score another big century. However, many former cricketers have said that after such a consistent performance, he should get a chance in the Indian side.

That is one of the reasons that after reaching his century, the batter got emotional and tears came out of his eyes. His celebration was also up to the mark.

Sarfaraz Khan gets emotional after completing his hundred in the Ranji Trophy Final.

Twitter reacts on Sarfaraz Khan getting emotional after scoring his century

So the best batsman from that 2016 u19 batch is finally kicking off now. Der aaye but yeh bohot lambe time ke liye aaye hai iss baar.

Sarfaraz Khan absolute unstoppable in Ranji trophy. He is just unbelievable form. He played Incredibly well in this Ranji trophy 2022. He scored this hundred in Crucial situation for Mumbai. pic.twitter.com/UgsuOIL7sb

Should Sarfaraz Khan get an India call-up? He’s in the form of his life & scored consistently for 2 seasons. Whatever he can do he has done. The ball is now in the selection committee’s court.

Certainly deserves to be in the Indian Test squad when India go to Bangladesh later this year.

When not unbeaten, he’s converted 7 of the 50+ innings into 100s which includes 1 triple hundred, two double centuries & three 150s🔥🔥🔥

After 24 first class games, Sarfaraz Khan is averaging 81 and counting. Has hit 8 hundreds, latest in the Ranji final. It’s highest FC average since Sir Don Bradman for someone with over 2000 runs. If that’s not good enough to get an India call up, tell me what is! #RanjiFinal