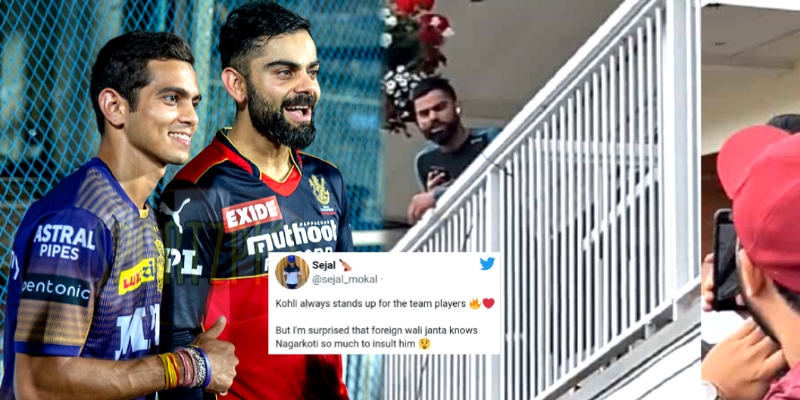 The Indian cricket team is in full preparation mode as they prepare for the upcoming 5th Test match against England, that is pending from last year. However, during India’s warm-up match Leicestershire, something else caught attention of the fraternity.

A viral video is doing rounds on social media for the last couple of hours, in which, former India captain Virat Kohli is seen taking a class of a spectator in attendance, who reportedly abused Kamlesh Nagarkoti.

Note that, Kamlesh Nagarkoti is not a member of the playing squad for the 5th Test match against England but has been included into the travelling squad as the net bowler of the team.

The video opens up with Virat Kohli, standing on the balcony, is having a chat with a spectator, who tells Kohli that he wanted to take a phot with Nagarkoti, but Nagarkoti did not respond to the request.

He further told Kohli that he has especially taken leave from his job to watch the match and deserved to get a picture with Nagarkoti. To which, Kohli responded saying that the player is here for the match, not for the particular person.

The video is massively doing rounds on social media, and many fans have taken the opportunity to praise the former India captain.

Kohli always stands up for the team players 🔥❤️

But I'm surprised that foreign wali janta knows Nagarkoti so much to insult him 😲 https://t.co/lebaMU9z3A

Virat Kohli got angry with the behaviour of the fan, who was making fun of Kamlesh Nagarkoti.#ViratKohli #LEIvIND pic.twitter.com/thTlWnW7FD

Real Captain who take stand with the youngesters, Kohli slammed a guy who was making fun of Kamlesh Nagarkoti during warm up game pic.twitter.com/rJrJpKddfr

In yesterday during the warm up match – A man in the crowd insulting and making fun of Kamlesh Nagarkoti when he was on the field and then Virat Kohli came to ask that why you misbehaving with him and he said he is here for match not for you.

Virat stood up like he always does for his team-mate (Nagarkoti) when he was insulted by a man from the crowd. Standing up for others when it's needed is something that captain kohli has taught us all ❤🇮🇳 #ViratKohli𓃵 pic.twitter.com/D0N52qliFL