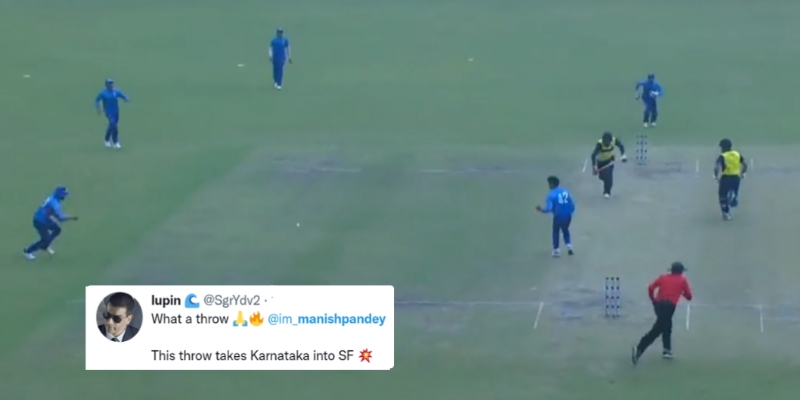 In the quarterfinal of Syed Mushtaq Ali Trophy, Karnataka and West Bengal battled in an exciting game of cricket. The game went down to the Super Over and Karnataka came out victorious. However, before that, it was an incredible direct hit by Manish Pandey that brought Karnataka back into the game. In this article, we take a look at how Twitter reacted to Manish Pandey’s stunning throw that took Karnataka to the semis of SMAT.

Karnataka win the Super Over

Bengal needed 20 runs in the final over to win the game against Karnataka. Youngster Ritwik Chowdhury helped his team reach a situation where Bengal needed a single run of the last ball. However, in the last delivery, Manisha Pandey executed a direct hit that tied the game. KC Cariappa then bowled a great over to give Karnataka a modest total of 6 to chase in the Super Over. Manish Pandey took just two deliveries to achieve that. With this, Karnataka entered the semi-finals of SMAT and everyone is now looking at a Tamil Nadu vs Karnataka game in the final.

Manish Pandey is one of the best fielders in the game. Despite not having an extraordinary game as a batsman, he had a terrific game as a captain and an outfielder. His last ball heroics is what helped Karnataka come back into the game. Twitter reacted to this throw:

What a throw that was from Manish Pandey. We should win this game and prove all the doubters wrong. Please change the commentators for super over 🤷🏻‍♂️🤷🏻 #SMAT2021 #KarvBen

Manish Pandey you beauty what a throw under pressure !