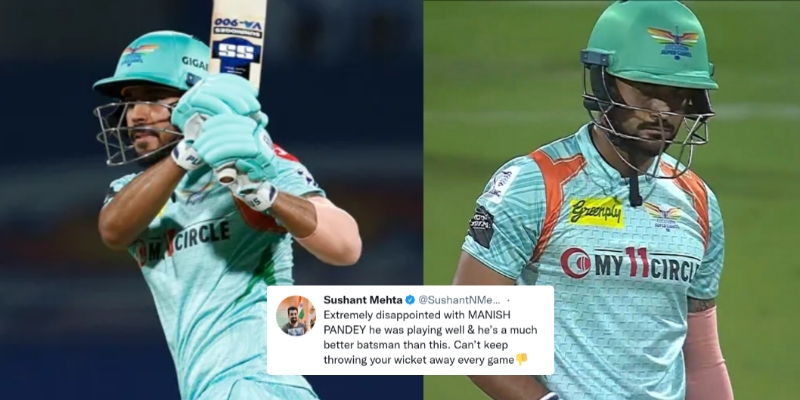 All the Kolkata Knight Riders (KKR) fans who witnessed Manish Pandey when he was playing for them, now if they watch him play in the IPL, he may be thinking is this the same Manish Pandey.

Yes, that’s how much his performance has gone down. Manish Pandey has not been able to perform to his best level ever since he switched from the Kolkata Knight Riders (KKR) to the Sunrisers Hyderabad.

People still remember that 94 runs from Manish Pandey that helped KKR down the Kings XI Punjab in the Indian Premier League (IPL) 2014, guiding the Knight Riders to their 2nd ever IPL Trophy.

After some unsuccessful years with the Sunrisers Hyderabad, he was not retained and was picked up by Lucknow Super Giants for 4.6 crore in the IPL 2022 Mega Auction.

Extremely disappointed with MANISH PANDEY he was playing well & he’s a much better batsman than this. Can’t keep throwing your wicket away every game👎#SRHvsLSG #IPL2022

Manish Pandey's fate is probably the worst. Plays a couple of good shots and hits a dolly Straight to the fielder everytime.#SRHvsLSG

I don't say these things, but Manish Pandey looks finished. Jokes apart, he should come up the order.

Manish Pandey at KKR was something else. Was a proper anchorman. Used to direct the innings rising up to the occasion. Hard to see the downfall of a batsman who was the first Indian to acore a hundred in the IPL.