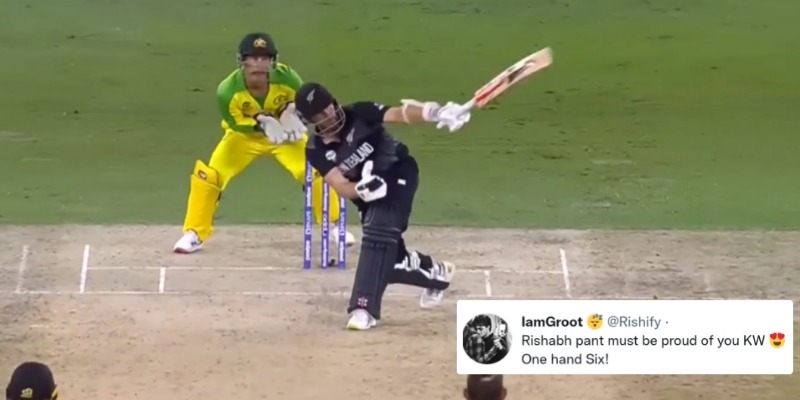 New Zealand do well in the first innings

New Zealand lost the toss and had to bat first. They had a conservative start and the semi-final hero Daryl Mitchell fell early. The Aussies bowled well and hence, Guptill and Williamson could not get going.

However, one Mitchell Starc over changed the game. The Kiwi skipper found his timing and added runs quickly to the scorecard. With this, the Kiwis are the favourites to win the game now.

In the 13th over, Kane Williamson played a one-handed six of Glenn Maxwell’s bowling. Maxi deceived Williamson with the flight and Kane, who had already stepped forward went through with the shot. His bottom hand came off the bat and the ball ended going past the ropes. Here is how Twitter reacted to the rare sight:

Seems like Williamson took lessons from Rishabh on how to hit one-handed six against Australia. #T20WorldCup

Williamson mimicking Pant’s one-handed six. Cricket, meet Baseball. This is going to catch on for sure. #T20WorldCupFinal

Rishabh Pant might wish to sue Williamson for breach of copyright for that one-handed six that Williamson played off Maxwell. #T20WorldCupFinal #NZvAUS

If the @BLACKCAPS win this match, will Kane Williamson’s one-handed six gain immortality alongside Lance Cairns’ effort at the MCG in 1983?