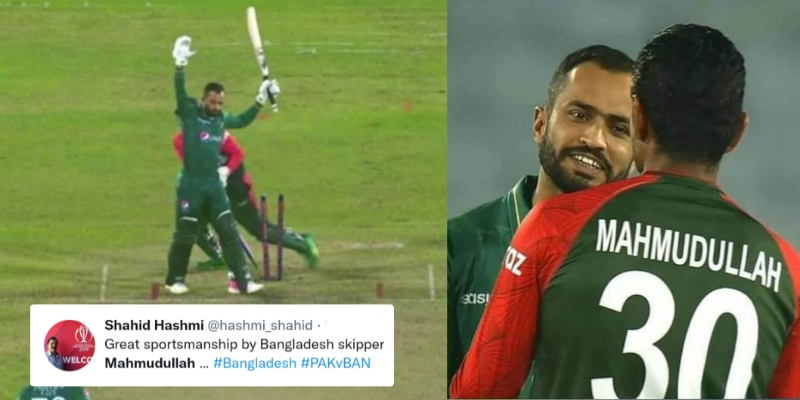 The final T20I match of the Pakistan vs Bangladesh T20I series happened earlier today in Dhaka. The Pakistan cricket team had already taken an unassailable 2-0 lead in the 3-match series. They tried some new names in the third game, and the match went down to the wire. Bangladesh batted first and scored 124/7 in their 20 overs. Naim Sheikh scored 47 runs off 50 deliveries, while captain Mahmudullah failed to get going, scoring 13 runs off 14 deliveries. Mohammad Wasim was the best bowler for Pakistan, returning with figures of 2/15.

In the second innings, Pakistan got off to a slow start. Captain Babar Azam added 32 runs for the first wicket with Mohammad Rizwan in the first seven overs. Haider Ali’s 45-run knock took them closer to the target, but Bangladesh took the game to the final over.

Mahmudullah took 3 wickets in the final over

Mahmudullah bowled the delivery and it hit the stumps of Mohammad Nawaz. However, the batter moved and the ball was declared dead. Mahmudullah showed sportsman spirit and bowled another ball, which then went for a four. Twitterati praised him for his gesture. Here are the top reactions:

Hats off to Mahmudullah for his grace and sportsman spirit. Classy ! Nawaz was stretching it a bit with that last minute cop out.

🗣️ “I was looking down and he (Mahmudullah) delivered the ball. When the ball had come halfway, then I looked up and saw the ball, which is why I pulled out.” – Mohammad Nawaz#BANvPAK | #Cricketpic.twitter.com/zv0xaSHnAC

Clearly Nawaz wasn’t ready for this and thats why he opted not to play
But also good spirit here by Mahmudullah as he accept Nawaz answer and Carry on with a Last ball
Good Gesture and should be appreciated 👍#PakvBan pic.twitter.com/kS3CzhaEf5

Mahmudullah is a top player and even better human being ❤️❤️❤️
He has a pure heart.
Great sportsmanship from him @Mahmudullah30 https://t.co/lxfVlSgWem

Mahmudullah did not miss the chance to take the revenge on very next ball 😁👍🤣 #PAKvBAN pic.twitter.com/Nyx5ZjshRz