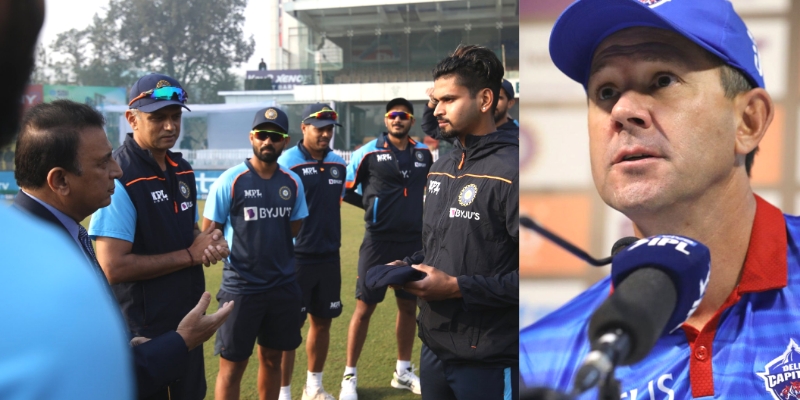 Notably, Ricky Ponting plays the role of Head Coach for Shreyas Iyer’s Indian Premier League (IPL) franchise Delhi Capitals, while Iyer is one of the vital members of the team.

The Indian cricket team have taken the field today in the first Test match of the 2 match series against New Zealand. Mumbai born right-hand batsman Shreyas Iyer got his debut in Test cricket in this match.

The stand-in captain for the 1st Test, Ajinkya Rahane had already confirmed yesterday that Shreyas Iyer will make his debut. Today before the match, the youngster was present the cap by the legendary batsman Sunil Gavaskar.

Shreyas Iyer has become India’s 303rd cricketer to play in Test cricket. He received a moment to cherish when, probably India’s one of the best batsman Sunil Gavaskar handed him the cap.

Reacting to Iyer’s debut for Team India in Test cricket, one of the veteran of the game and Iyer’s IPL franchise Delhi Capitals’ Head Coach Ricky Ponting took to the social media to react on it.

Ricky Ponting shared, “Having seen all the work you’ve put in over the last few years, very well deserved and only the beginning for you mate. Proud of you @ShreyasIyer15.”

Having seen all the work you've put in over the last few years, very well deserved and only the beginning for you mate. Proud of you @ShreyasIyer15. https://t.co/Tnb3xZNXhX

Team India will play New Zealand over the coming days in a 2 match Test series, that kicked-off today, the 25th of November, with the first match being played in Kanpur. The 2nd Test will be played in Mumbai from 3rd December onwards.

Team India has given rest some of the top Test players for this series, the likes of Rohit Sharma, Jasprit Bumrah, Mohammad Shami, while Virat Kohli has been given rest for the 1st Test and will be back in the 2nd Test.

In absence of the senior pros, Team India has given a big opportunity to Shreyas Iyer, Shubman Gill, Mayank Agarwal as such.