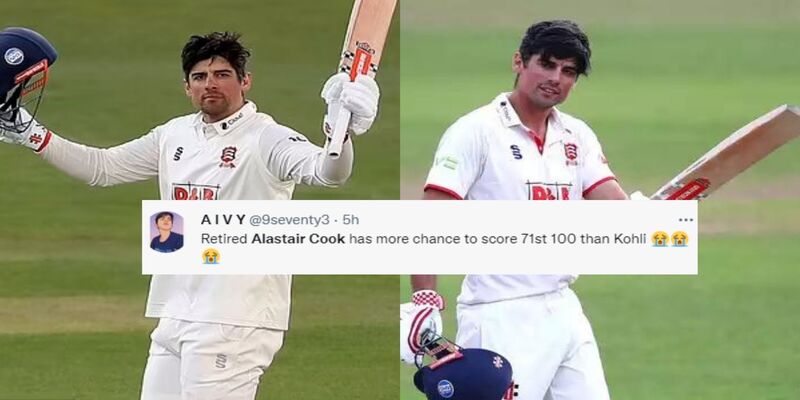 Sir Alastair Cook needs no introduction in the game of cricket. The former England skipper is arguably the best batsman in England in red-ball cricket. He has scored loads of runs at both the international and domestic levels. On Thursday, April 7, Cook scored another century in a county game against Kent. The game between Essex and Kent is underway and the former England skipper smashed his 70th county century.

After his knock in the first innings, none could say that he had retired four years ago in 2018. He has once again shown why he is rated so highly. He, as well as the young batter While Browne added 220 runs for the first wicket for Essex to give their team an important start. Both batters scored their respective centuries in the process. Browne scored 107 runs off 253 balls. Cook also scored 100 off 266 balls.

Sir Alastair Cook demonstrated his insatiable hunger for runs on the first day of the new County Championship season in England and Wales by scoring a century for Essex. At the stumps on Day 1, Essex were 272/4. Both openers batted for almost the whole day but fell in the evening sessions to Jackson Bird. The pacer ended the day at 2/49. Dan Lawrence didn’t make much of a contribution as he got out after making just seven runs. At one stage, they were 220/0 but lost their four wickets for 42 runs.

Many ex-cricketers and fans heaped praise on the century made by Alastair Cook. It is almost four years since he left international cricket, but it still looks like he has got a lot of cricket left in him. On the other hand, the current situation of England’s test side is getting worse after every series. Fans on Twitter urged Cook to make a comeback and praised him on social media.

It was his 70th first-class ton.

Another season, another century for Alastair Cook!

Will this young man make it to the England squad soon? 😄 pic.twitter.com/2QTnxeskHS

37-year-old Alastair Cook scored 100 runs from 266 balls including 11 fours against Kent in the first match of County 2022. pic.twitter.com/DP4CqTMuIX

If he does like his mentor Graham Gooch and plays until he's 42 he could match him and make 100 fc hundreds? https://t.co/eD5lTCwOhZ

Any chance of Alastair Cook opening the batting and Darren Stevens opening the bowling for England this summer?#GoldenOldies