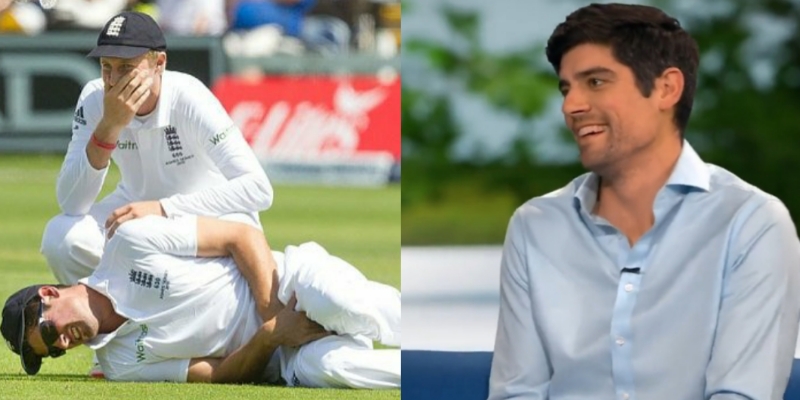 England has lost its way in the ongoing Ashes series in Australia. The team lost the game in Adelaide, thereby giving Australia a 2-0 lead in the competition. Meanwhile, Joe Root had a few nervy moments in the game. While he missed a part of the match due to an abdominal issue, later, with the bat, he was struck by the ball in a sensitive area. In this article, we take a look as Alastair Cook reacts hilariously to Joe Root receiving a painful blow at Adelaide.

After he came out to bat in the second innings, Joe Root had to endure a tough situation when he received a painful blow by the ball that was delivered by Mitchell Starc. Hence, Root had to stop for a while and resume the game.

Incidentally, in the 2015 Ashes, Alastair Cook also had to bear a similar concern. At Cardiff, Cook was at the slips and the ball, from the edge of Steve Smith’s bat, stuck him in the midriff region. Initially, Joe Root offered his consolation but he was seen smiling after that. Hence, with the roles reversed, Cook had a hilarious reaction to Root’s problem in Adelaide.

Speaking for BT Sport, he said, “I would love to say what goes around comes around! But I was OK. I’ve had two children since. I don’t know how Rooty is at the moment.”

"I was okay, I've had two children since…"

A mountain to climb for the Englishmen

Meanwhile, the English Team continues to struggle in the Ashes. The team has lost the second game and it is almost impossible for the team to even secure a draw in the tournament. Unless there are some effective changes in the English XI, a 5-0 is looking to be in the favour of Australia at the moment.