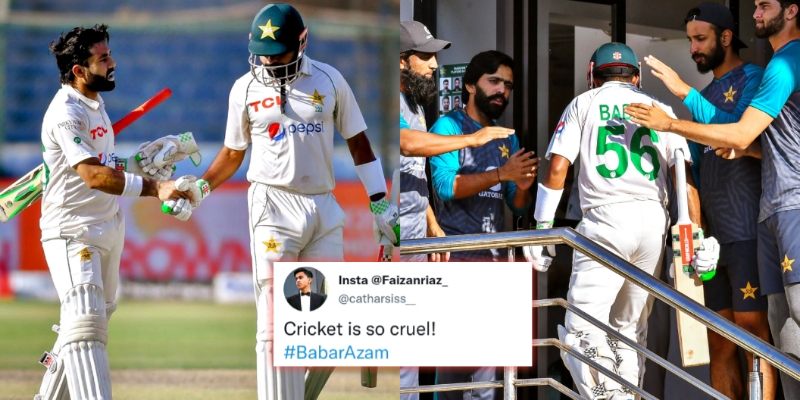 While Babar Azam played the best knock of his entire career and would cheris it forever, he must be gutted and heart-broken to have got out for 196 runs, missing out on his Double Hundred by just 4 runs.

Babar Azam was carrying the hopes of the Pakistan cricket team in the 2nd Test match of the 3 match series as Azam played his career best inning of 196 runs, keeping Pakistan still alive in the match, and have ensured a draw atleast for his team after a disastrous show with the bat in the first inning.

As of writing this, there is only 10 overs of play left for the match to conclude, and while a win is not possible, the fans of the Pakistan team must be very happy to have ensured a draw atleast after their disappointing show with the bat in the first inning.

Winning the toss, Australia decided to bat first and batted for three straight days, putting on a big score of 556 runs on the board. Usman Khawaja scored a big Hundred, but Alex Carey missed by couple of runs.

In response to which, Pakistan’s show with the bat was very poor as they were bundled out for just 148 runs. Australia decided to cut short their 2nd inning for just 97 runs as only a day and half of play was left, and Australia were thinking for win here.

But, their dreams were shattered by a beautiful batting performance from the Pakistan skipper Babar Azam, who scored 102 runs by the end of the Day 4’s play. Australia were still hopeful of a victory on the last day, but once again, Babar Azam remained a wall between Australia and victory.

Azam went on to score past 150, but was finally towards the end of the match by Nathan Lyon when he was batting on 196 runs. It was a heart-breaking moment for not only Babar but also for his fans. He was already on his career best score but would have surely love to take that further and pass the 200 marks.

Fans on Twitter were pretty disappointed to see Babar Azam missing out on a deserving double hundred by just 4 runs.