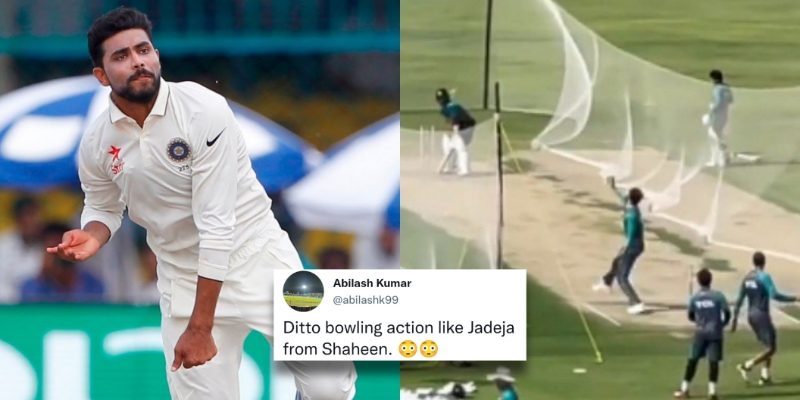 The second match of the 3-match Test series between Pakistan and Australia will be played at the National Stadium in Karachi from Saturday, the 12th of March. Both the teams have started practice before this all important match after the first match ended in draw. During the net session, Pakistan’s pace bowler Shaheen Afridi, who left a mark with his fiery balls in a very short span of his international cricket, was seen bowling spin on the nets, imitating India’s Ravindra Jadeja.

Shaheen was seen imitationg the bowling action of Indian team’s star all-rounder Ravindra Jadeja on the nets, the video of which has gone viral on the social media websites. Many fans have reacted on this through their social media, some even calling it a carbon copy of Jadeja.

Ravindra Jadeja, who has most recently gained the nickname ‘Rockstar’, has recently become the world’s No. 1 all-rounder in the latest updated ICC Test Rankings. He achieved this feat by overtaking former West Indies captain Jason Holder. Jadeja played a record unbeaten innings of 175 runs against Sri Lanka in the first inning of the Mohali Test. After which, he followed that up with a total of 9 wickets in both the innings of the match. Sir Jadeja had 5 dismissals in the first inning and then 4 dismissals in the second inning.

Talking about the first Test match between Australia and Pakistan, the match played in Rawalpindi ended in a draw. The match was played on a very flat pitch, meaning that only 14 wickets fell in total 5 days’ play.

Pakistan won the toss and elected to bat first and declared their first innings for the score of 476/4, Azhar Ali and Imam-ul-Haq both scored big centuries for Pakistan. In reply, Australia also scored 459 runs, with Usman Khawaja and Marnus Labuschagne missing out on their centuries by a very close margin. On the fifth and final day, Pakistan scored 252 runs in the second innings without losing a wicket and the match was declared a draw.

Shaheen Afridi took 2 for 88 in 30 overs in the Rawalpindi Test. Afridi has taken a total of 88 wickets in 22 Test matches played so far at an average of 24.35.

It means Pakistan is preparing spin turner next test.. Even shaheen is practising spin 😂