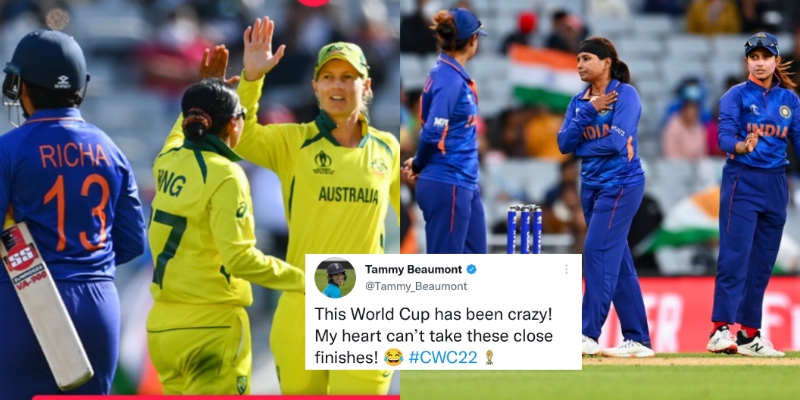 Skipper Meg Lanning helped Australia beat India’s women in the 18th match of the ICC Women’s World Cup. On Saturday, both teams locked horns at Eden Park, Auckland, in a group match. It was a do or die encounter for India to save their fourth position on the table. Australia was well and truly ahead as they had won all four matches they had played. And now, with a win against India, the Women in Yellow have become the first team to enter the semi-finals of the Women’s World Cup 2022.

The match had a nail-biter of a finish, going to the last over of the match. Both results were possible until the last cameo from Beth Mooney. Needing eight runs off the last over, that too off Indian veteran pacer Jhulan Goswami, And eventually, it was the Australian batters who held their nerve and finished the game with three balls to spare. Mooney smashed two boundaries off the first three balls from Jhulan and sealed the deal for the Australian women.

And it was Australian skipper Meg Lanning who was named the “Player of the Match” for his fantastic performance. She played a match-winning inning for her team. Lanning scored 97 runs off 107 balls, including 13 boundaries. She missed a well-deserved hundred by just three runs. The Australian women are undefeated in this tournament, having won five of their five games. On the other hand, India has lost three matches out of five, and it will be a difficult task for them to recover from here on. The Women in Blue need to win their two remaining matches by a big margin.

Earlier, Australia won the toss and chose to bowl first. It was in good condition to bowl up front as it rained in the morning. The Indian women didn’t have a great start, as they lost their both openers in the first six overs. India captain Mithali Raj, Yastika Bhatia and Harmanpreet Kaur scored a half-century apiece to help India reach a competitive target of 277/7 against Australia.

The Women in Blue recovered from two early losses as Mithali (68 off 96) and Yastika (59 off 83) added a vital 130 runs for the third wicket to help India regain momentum. Veteran batter Harmanpreet Kaur also came to the party with a quickfire unbeaten 50. She made 57 runs off 47 balls, including six boundaries. She, along with Pooja Vastrakar (34 off 28), scored 64 runs in last eight overs.

This World Cup has been crazy! My heart can’t take these close finishes! 😂 #CWC22 #indvaus

Brilliant batting performances by the captain @M_Raj03 vice-captain @ImHarmanpreet and @YastikaBhatia Don't be disappointed by the result, girls. Come back stronger for the next game 🙌 #CWC22 #IndvAus

Not the result we wanted from our #WomenInBlue. 😓

After this defeat India's road to the semi-finals get more tough for the girls, but we will supporting our girls till the last game. ✊💪🏻#TeamIndia | #WomenInBlue | #INDvAUS pic.twitter.com/MTdxGNAJq3