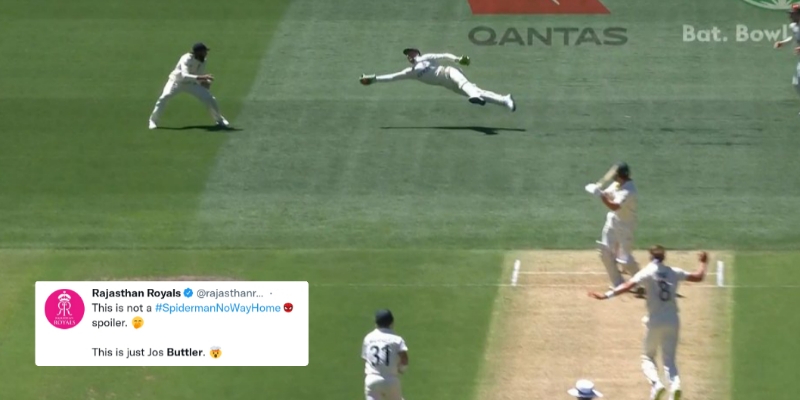 The cricket fans on Twitter has gone bonkers after witnessing Jos Buttler’s sublime ‘Spiderman’ like catch to dismiss Marcus Harris during the 2nd Ashes Test match.

The 2nd match of the historic Ashes has began at the Adelaide Oval in Adelaide. Australia currently leads the 5 match series 1-0 after winning the first match at the iconic Gabba in Brisbane a couple of days back.

Well, the 2nd match though began with a quite a sad news for the Aussie fans as their new Test captain Pat Cummins has suffered an injury and has been ruled out for the match, Steve Smith is leading the team, while Michael Nesser is making his Test debut.

Steve Smith opted to bat first, but got of the worst possible start as the English bowlers bowled in good line and length, making it difficult for the Aussie openers, as a result of which, Stuart Broad gave the Kangaroos their first blow of the match.

Stuart Broad trapped Marcus Harris to dismiss for just 3 runs after facing 28 balls. It was a short ball going down the leg and Harris tried to connect with a pull shot, which he didn’t connect well and Jos Buttler behind the stumps picked up a stunning catch, diving to his right full stretched.

The moment made the fans go bonkers as they started calling Jos Buttler a ‘Spiderman’.

Australia though, recovered well from that blow and put up 45 runs on the board in the first session, losing only Marcus Harris. David Warner and Marnus Labuschangne are the two who are trying to carry forward and steady the Aussies’ ship.

INSANE! Buttler pulls in an all-timer behind the stumps! #Ashes pic.twitter.com/v96UgK42ce

This is not a #SpidermanNoWayHome spoiler. 🤭

Someone who is not watching this match will think that it’s a YouTube Thumbnail😂😂
Warra grab Jos Buttler👏 pic.twitter.com/mNMUO9KZEX

Is it a bird ? Or a plane ?
No .
It’s Jos Buttler diving at oval. pic.twitter.com/c7trpptJ7m