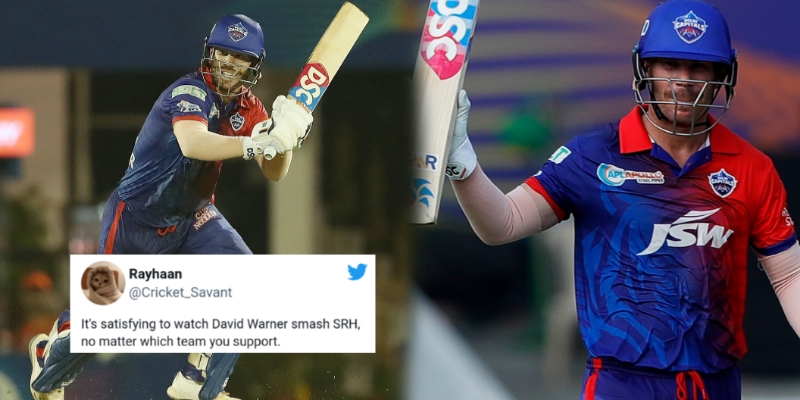 Taking the field tonight against his former team, David Warner pointed out what Sunrisers Hyderabad let off leading upto the IPL 2022 Mega Auction.

Match number 50 of the Indian Premier League (IPL) 2022 is being played between Delhi Capitals and Sunrisers Hyderabad in Mumbai’s Brabourne Stadium.

Winning the toss, Kane Williamson, the captain of the Sunrisers Hyderabad won the toss and opted to bowl first. Former Hyderabad opening batsman David Warner was featuring today against his former team and he made most of it.

The Aussie opening batsman was left out of Sunrisers Hyderabad’s playing XI in the most of the Indian Premier League (IPL) 2021 season due to poor run of form, and was eventually released before the IPL 2022 Mega Auction.

He was bought by the Delhi Capitals in the Mega Auction and his fortune has been changed ever since. The left-hand batsman has found his lost rhythm.

He displayed his class infront of his former team tonight as the batter unfortunately missed out on his century, scoring 92 runs from 58 balls.

Twitterati also heaped praise on the batter’s performance in the match against his former team.

It's satisfying to watch David Warner smash SRH, no matter which team you support.

The come back story of David Warner will be remembered forever – dropped from SRH team then Man of the tournament in T20 WC 2021, scoring runs for fun in IPL 2022 including unbeaten 92*(58) vs SRH.

Warner enjoying every run against SRH. Like he was getting 1 lakh for every run. Love it. 🤣

We all wanted Warner to score a Hundred today including some SRH fans as well for the way He was treated last season.

Warner deserves all the runs for the way #SRH treated him the last season!

“You guys are literally on no.6 in Test ranking” – Twitter slams England’s Barmy Army for mocking Virat Kohli
“Walking like a park”- Twitter reacts as Kartik Tyagi misses a short ball from Kuldeep Yadav and gets bowled after stepping out
To Top