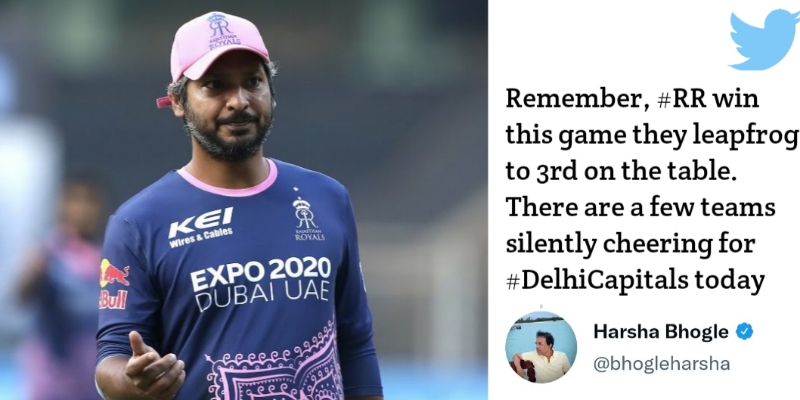 The Rajasthan Royals captain Sanju Samson called the coin toss right and invited the Delhi Capitals to bat first. The Capitals lost their opening batters Shikhar Dhawan and Prithvi Shaw in the powerplay itself. However, some decent knocks from Shreyas Iyer, Rishabh Pant and Shimron Hetmyer helped the Delhi-based franchise take their score past 150.

In reply, the Rajasthan Royals’ new opening pair of Liam Livingstone and Yashasvi Jaiswal failed to fire. Number three batter Sanju Samson scored 70 runs, but the team managed to score only a total of 121 runs in their 20 overs. Hence, the Rajasthan Royals are now down to the sixth rank on the standings of the 2021 edition of the Indian Premier League.

As per Harsha Bhogle, many teams in the 2021 edition of the Indian Premier League would have been cheering for Delhi Capitals in the match against Rajasthan Royals

Harsha Bhogle made a tweet during the IPL 2021 fixture between the Delhi Capitals and the Rajasthan Royals. Here’s what he wrote:

“Remember, #RR win this game they leapfrog to 3rd on the table. There are a few teams silently cheering for #DelhiCapitals today.”

Soon, he received a response from RR, who posted a meme of Johnny Lever and asking which teams. Here’s what happened next:

Haha, all around you on the table! 😂