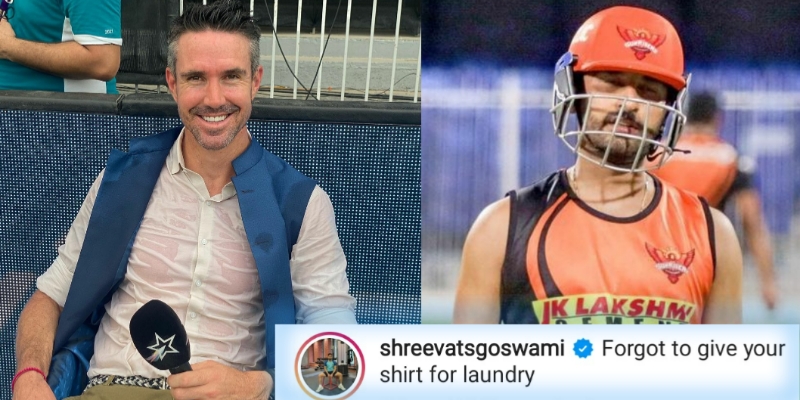 The Sunrisers Hyderabad (SRH) have been one of the most unsuccessful teams in the 2021 edition of the Indian Premier League so far. The Orange Army has played eight matches, registering one win and seven losses. Tonight, the Sunrisers Hyderabad are set to play against the Punjab Kings at the Sharjah Cricket Stadium. However, just before their ninth fixture of the 2021 edition of the Indian Premier League, former England cricket team star Kevin Pietersen has taken a shot at the franchise.

Recently, Pietersen uploaded a stylish photo of himself on Instagram. The shirt looked unironed, and the wicket-keeper batter of the Sunrisers Hyderabad squad, Shreevats Goswami pointed out the same thing in the comments box of the Instagram post that Pietersen shared. Here’s how Kevin captioned his new post:

“Caption this from now?”

Pietersen could be seen sweating in the heat of the United Arab Emirates. Many fans would know that the former England cricket team star is currently working for Star Sports as a cricket expert for the 2021 edition of the Indian Premier League. Soon, Shreevats Goswami commented:

“Forgot to give your shirt for laundry.”

“Mate! If your team was here, I wouldn’t have bothered sweating so much to talk about them. I would have left…”

The Sunrisers Hyderabad have slim chances of qualifying for the playoffs in the 2021 edition of the Indian Premier League. It will be interesting to see how they perform against the Punjab Kings in today’s game. Meanwhile, you can see the conversation between Shreevats Goswami and Kevin right here: