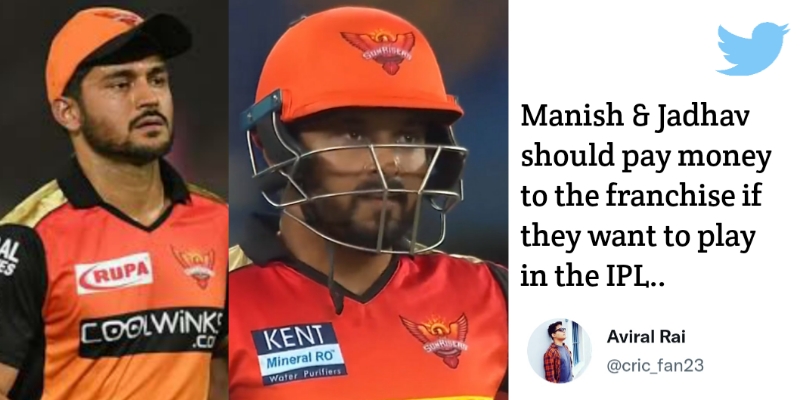 Punjab Kings defeated Sunrisers Hyderabad in Match 37 of IPL 2021. Although after the first innings SRH had an upper hand, PBKS bowlers did well to keep the team’s playoff hopes alive. In this article, we take a look at a few of the Twitter trolls on Manish Pandey and Kedar Jadhav after their poor show in SRH’s loss to PBKS in IPL 2021.

Sunrisers Hyderabad out of playoff race

Sunrisers Hyderabad has now been officially knocked out of IPL 2021. A team that had been doing consistently well in the last few seasons, the display in 2021 will be a difficult pill to digest. When the team arrived in UAE, the expectation was that they would repeat a similar show which had put them in the playoffs in IPL 2020. However, that was not to be.

SRH has lost both games in the UAE leg and can only be party spoilers now. With 126 runs to chase, the team just needed one partnership to get through. However, the pitch was difficult, and the batsmen were also underwhelming. A late blitz by Jason Holder offered hope but the Punjab bowlers did not allow that to happen.

One of the main reasons for SRH to lose is the performance of the batsmen. After the wickets of David Warner and Kane Williamson fell, a decent show by the Indian batters was enough for the team to chase the target. However, both Manish Pandey and Kedar Jadhav failed in their attempt. They both were clean bowled by young leg-spinner Ravi Bishnoi. While Manish scored 13 runs from 23 balls, Kedar made 12 runs in as many deliveries. Naturally, Twitter was disappointed with the performance of the duo. Hence, the players were subject to quite a few trolls. We take a look at a few of them below.

Manish & Jadhav should pay money to the franchise if they want to play in the IPL…. #IPL2021

We don’t have just one we have 3
1.Manish pandey
2.kedar jadhav
3.vijay shankar pic.twitter.com/MOJSkFkJAz

Now that you are out of the tournament, please for the love of the game drop Manish and Jadhav and give chances to Garg and Samad higher up the order. They really can’t do worse than this.ipl