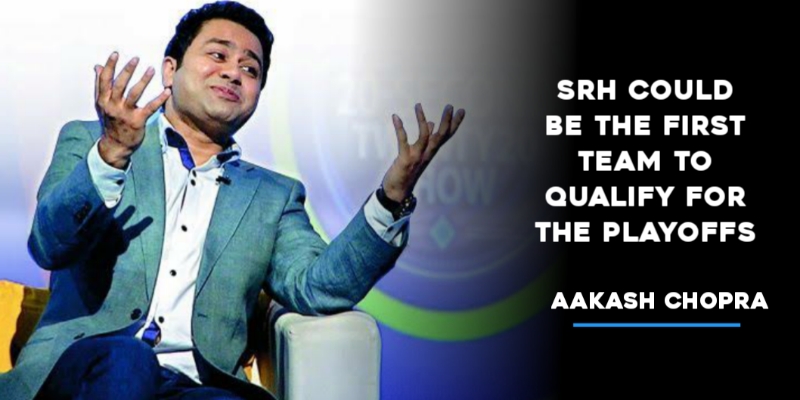 Predictions of IPL 2021 from Star Sports’ famous commentator Aakash Chopra have become a talking point of late. The reason behind is that the winners that Aakash Chopra predicts often end up on the losing side. Even the man himself has taken note of the same. Recently, an old prediction by Aakash about the 2021 edition of the Indian Premier League was going viral.

Chopra had made a bold prediction and said that the Sunrisers Hyderabad would be the first team to qualify for the IPL 2021 Playoffs. However, Hyderabad has now become the first team to be eliminated from the 2021 edition of the Indian Premier League. Their chances of qualifying for the second round are negligible as they have already lost eight of their first nine matches in the league stage.

But here’s what Aakash Chopra said about SRH earlier:

“They are definitely qualifying and they can finish at No.1 or No.2. The Sunrisers Hyderabad could be the first team to qualify for the playoffs. They might win six or seven matches from their first nine and these conditions should help their cause,” said Aakash Chopra.

Many fans would know that VVS Laxman, who is the mentor of the Sunrisers Hyderabad team, has done commentary with Aakash in the past. Hence, after the Hyderabad-based franchise lost to the Punjab Kings yesterday and got eliminated, here’s what Chopra tweeted:

“Sorry Laxman Garu You can blame it on me #SRH.”

Sorry Laxman Garu 🙈 You can blame it on me… #SRH https://t.co/fP7wu2UZfd pic.twitter.com/Xze5VHBnbI

Sunrisers Hyderabad will be in action tomorrow when they battle the inaugural champions Rajasthan Royals. While SRH have almost zero chances of making it to the Top 4, they can spoil RR’s party by defeating them tomorrow in Dubai.