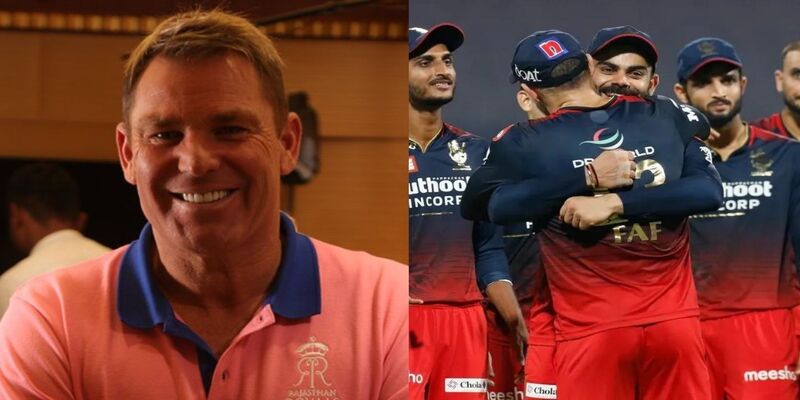 The Qualifier 2 took place on Friday between Royal Challengers Bangalore and Rajasthan Royals at Narendra Modi Stadium. And after a completely dominating performance from Sanju Samson and his team, RR has advanced to the final on Sunday at the same ground. On the other hand, RCB, who had played really well throughout the season, came to an end with a loss last night.

However, they lost the match, but they won many hearts and respect after the match when they congratulated the Rajasthan Royals and wished them luck for the finals. The RCB admin sent a heart-winning tweet and quoted, “The Great late Shane Warne is smiling on you. Well played tonight, @rajasthanroyals and good luck for the final,” RCB tweeted after the loss in Qualifier 2 that ended their hopes of winning a maiden IPL title.”

The Great late Shane Warne is smiling on you. Well played tonight, @rajasthanroyals and good luck for the final. 👍🏻#PlayBold #IPL2022 #RRvRCB

The tweet from RCB caught the eyes of everyone and was praised among the fans. Cricket lovers heaped praise on RCB for the special tweet and RR also replied with red heart emojis.

#rcbfans love and respect for the team #RCB is doubled now. https://t.co/lwCV7zVwGk

This is the beauty of the IPL. What a beautiful way to congratulate your counterpart…!!! https://t.co/GQlxEXRZeI

That's the spirit of cricket.

No other game gives u a chance to support ur opponent after getting defeated from it 😀 https://t.co/Me6L6wdWiB

Love this.
Shane took the Rajasthan Royals to victory in the very first season. His was the least expensive team in the tournament. But he inspired and the team stepped up… and won. It was exhilarating.
He’d be proud of them today https://t.co/d0FiDDPtjo

Earlier in the match, Sanju Samson won the all-important toss and asked RCB to bat first. Virat Kohli didn’t make any contributions and got out for seven runs. After that, Rajat Patidar and skipper Du Plessis steadied the innings and added 70 runs for the second wicket. Once the skipper got out, Maxwell came in with some kind of intent and started playing his shots. But his innings was cut short by Boult after scoring a quick 24 off 13 balls. Patidar also brought up his half-century and scored 58 runs.

But once these two got out, no one of the RCB players was able to score runs, and RCB scored 157/8 in their 20 overs. Chasing the target, RR got a flying start and scored 66 runs in the power play. It was not a big target for a strong RR batting line-up and they chased it down with seven wickets left. Buttler scored his fourth century this season and remained unbeaten on 106*.

RR will now lock horns with Gujarat Titans on Sunday at the same venue for the final.