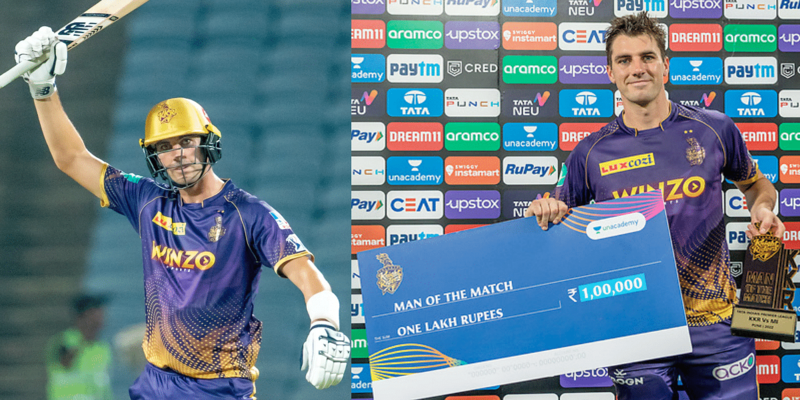 On Wednesday, the world saw one of the most thrilling innings in the history of T20 cricket. It was the match between Kolkata Knight Riders and Mumbai Indians. MI set the target of 162 for KKr to chase. At 13.1 over, half of the KKR were back at the hut, and it looked like one more wicket could have done the curtains for the KKR. But then came one of the most destructive innings from a lower order batter that changed the course of the match in favour of KKR.

It was none other than, the world’s number one Test pacer, Pat Cummins who scored a 14-ball half-century to win the match for his team with four over to spare. Cummins scored 56* off 15 balls and was named “Man of the Match” for his performance.

It was an incredible innings by the Australian pacer that had everyone by surprise. At the post-match presentation, Cummins said that he was also surprised by the way he played. He said that he went with a clear mindset to try to hit the ball at the shorter boundaries and it came off. Cummins also said that he bowled in his area at the end.

The Australian pacer is coming off a tour of Australia, where he led his team to a Test series victory. He further added that he was satisfied with the innings and that too in his first game of the season. Cummins also highlighted the changes the auction brought to the team. He said, “It’s a good mix of talent out there and quite relaxed with the boys.”

It was an incredible innings from the Australian quick that stunned everyone on the ground. He also smashed his fellow countryman, Daniel Sams, for 35 runs in his one over. Venkatesh Iyer also played a vital knock alongside him. Iyer scored 50* off 41 balls.

KKR skipper Shreyas Iyer also didn’t expect this kind of innings from Cummins. Iyer said that he was surprised to see him hit the ball like this because when he came for training he was bowling in the nets. And now, seeing him bat like this, I was totally surprised. Iyer also revealed that the plan was clear in the last 5–6 overs: it was Venkatesh who would anchor the innings. nd Cummins would go hard after the bowling. And it’s paid off for the team.

Opposition skipper Rohit Sharma was also stunned by the innings. He said at the post-match presentation that he never expected such an innings from that he should get the credit for this. He also said that MI had control of the game until the 15th over. But in the end, the result was something else.

Earlier, MI struggled in the first half of their batting. But with the help of Suryakumar Yadav (52), Tilak Verma (38*) and Kieron Pollard (22*), they ended the innings on a high.