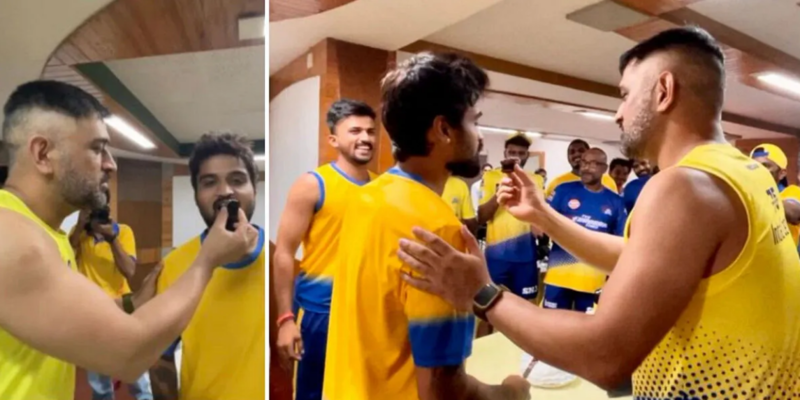 The countdown has begun for the Indian Premier League, which will kick off on March 26. All the IPL teams are in the process of preparation and finding the right combination for their team. And the first match of the 2022 season is virtually a rematch of the last season’s final. The defending champions, Chennai Super Kings, will face Kolkata Knight Riders in the first match of this marquee league. MS Dhoni and his team are doing practise in Pune, Maharastra.

And in between the busy practice schedule, CSK celebrated the birthday of their net bowler, Rocky Warney. Rocky’s birthday was on March 7th, and the whole CSK team and the support staff gathered at their hotel to celebrate his birthday. At that moment, Dhoni and other members gave blessings to him, and it was a special moment for the young pacer.

Rocky took to his Twitter account and shared his emotions with a celebration video. He thanked all the management, the whole team, and especially MS Dhoni. He was overjoyed with the simplicity of the skipper. The young pacer concluded, “Am very grateful to you and all the people of the team …Honoured and privileged…just surreal #csk #msdhoni.”

At the start of the video, Dhoni asked everyone, “Cake Kon Lgayega (Who Will Apply the Cake)?” The batting duo of Ambati Rayudu and Robin Uthappa have joined the CSK training camp in Surat. All-rounder and U19 World Cup winner Rajvardhan Hangargekar has also reached Surat to start his preparations with the team. However, the only concern is the injury of star bowler Deepak Chahar. He got injured during the T20I series against the West Indies last month. The franchise invested a heavy amount of INR 14.25 crore, so they will hope for his speedy recovery. Although he is one of the most bankable bowlers for the team.

Chennai is placed in Group B along with SRH, RCB, PBKS, and GT. And the BCCI has decided to host all the 74 league matches at four different venues in Pune and Mumbai. The first match will kick off between the two finalists from last season on March 26. And the final will be played on May 29.