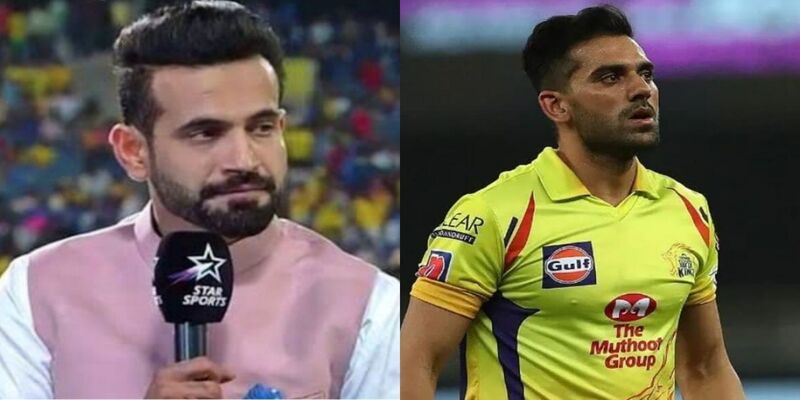 The first ball of the Indian Premier League will be bowled on March 26, when both last year’s finalists will face each other at the Wankhede Stadium in Mumbai. But the current CSK squad might miss the services of their star players. And the biggest name among these players is Deepak Chahar. The Indian pace-bowling all-rounder is suffering from a calf injury and is currently at the National Cricket Academy in Bangalore for rehabilitation. And it will be a worry for Chennai about which player will fill his boots. However, former Indian all-rounder Irfan Pathan has suggested the name of a player who could be an ideal replacement for Chahar.

Chahar suffered a hamstring injury during the final T20I match against the West Indies, which forced him to miss the Sri Lankan T20I series as well. The Chennai franchise signed the Indian all-rounder for a whopping price of Rs. 14 crore at the auction. He was the second costliest player at the 2022 auction. But there is some uncertainty about his fitness ahead of the 15th edition.

The all-rounder is a bankable bowler for MS Dhoni in the power-play. And he has been an integral part of the franchise throughout his IPL career. He has played 58 matches for CSK under MSD so far. He has taken a total of 58 wickets at an impressive economy rate of 7.70. The all-rounder is a complete swing bowler who is capable of taking crucial wickets upfront.

Rajvardhan Hangargekar is a young, promising all-rounder from Maharashtra. He showcased his real skills in the World Cup winning triumph with the India U19 team. He is among the bowlers who can click at 140+ kmph at will, and that makes him a bit challenging for the batter in the Indian conditions. Pathan also feels that Chennai should consider Hangargekar as a replacement for Deepak Chahar.

The former all-rounder expressed that CSK would wish Chahar to recover soon, but it will also be interesting to see how they will use Hangargekar in the IPL. Pointing to the name of the U19 all-rounder, Pathan said that the U19 all-rounder has got the real talent to replace Chahar in the bowling lineup. He further added during an interaction on Star Sports, “Apart from talent, experience also matters a lot in the IPL and Chennai have done a good job in retaining their old players.”

The former all-rounder praised the franchise for buying back their former players like Uthappa, Rayudu, and Bravo. He also rated the Chennai team as one of the most settled in the tournament. Pathan also highlighted the match practise of these players in the team. In particular, he named Dhoni, Uthappa, and Rayudu, who have not been in action since the end of the last IPL season. He said, “It will be important for Chennai to see how much cricket have their players played in recent times.”

At the end, he said that Shivam Dube would want to perform after shifting his base from Bangalore to Chennai. The Yellow Army is placed in Group B along with SRH, RCB, PBKS, and GT.

After going unsold in IPL Auction, Suresh Raina and Ravi Shastri to join Commentary panel for IPL 2022
“A bit of pain to see you both on opposite sides” – Pankhuri Sharma reacts to Pandya Brothers playing for 2 different IPL teams in IPL 2022
To Top