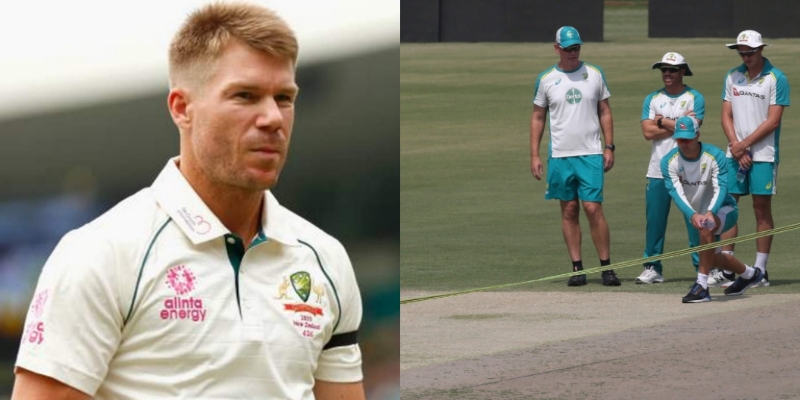 The day 1 of the 3rd match of the 3 match Test series between Pakistan and Australia is currently ongoing and is played at the Gaddafi Stadium in Lahore from the 21st March.

The central point of the whole of the Pakistan vs Australia Test series has been the pitches prepared for the matches in Pakistan’s various venues for the season, which has also received criticism from the fans, former players as well as the ICC.

Question again has been raised by the current Australian team’s opening batsman David Warner, who is also playing in the series. Warner has taken a dig at the PCB for once again preparing a flat pitch.

Taking to his Instagram handle earlier today, David Warner posted a Instagram story on his account, in which, his Australian teammates with him can be seen assessing the pitch. With the picture, he also included a picture of a road, hinting towards calling the pitch like a road, like it has been the case with the previous two matches as well.

David Warner has something to hint regarding the pitch for Lahore Test 🤔 #PAKvAUS pic.twitter.com/rln37B9Vnt

Talking about the match, host Pakistan and visiting Australia are currently level in the series after 2 matches played, but, none of the matches ended in any result other than a draw.

The 3rd and the final match of the series is currently ongoing in Lahore’s Gaddafi Stadium, which began on the 21st of March, on Monday.

As of writing this article, Australia has put 145 runs on the board as of tea break and has lost 2 wickets in the form of David Warner and Marnus Labuschagne, both were dismissed in the space of 3 balls by Pakistan’s left-arm pacer Shaheen Afridi.

As for David Warner, the left-hand batsman scored only 7 runs before was dismissed in the 3rd over of the match by Shaheen.