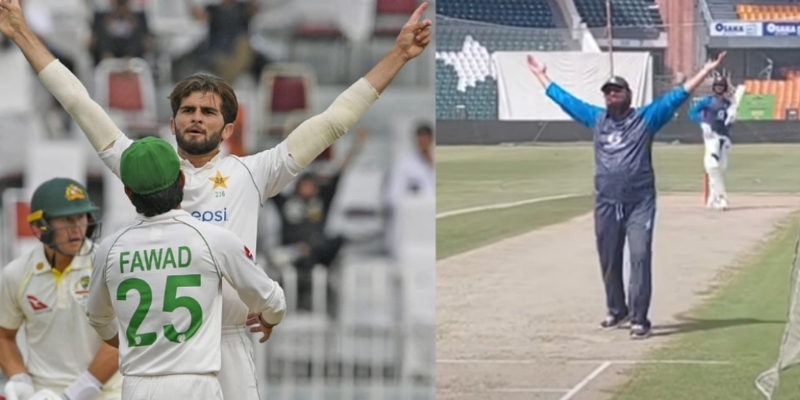 Pakistan cricket team is currently taking on Australia in the 3rd and the final match of the three match series, being played in the Lahore’s Gaddafi Stadium from March the 21st.

Before the match began today, on the 21st of March, Pakistan cricket team’s Head Coach Saqlain Mushtaq flexed his arms in the nets as he bowled couple of deliveries to pacer Shaheen Afridi, who was batting in the nets at that time.

The Pakistan Cricket Board posted a video on their social media channels today before the beginning of the 3rd Test match between Pakistan and Australia, where former Pakistan cricketer and now Head Coach of the team, Saqlain Mushtaq bowled to Shaheen Afridi in the nets.

In the video, it can be seen that Saqlain Mushtaq, who was one of the great off-spin bowler of his generation, was hit high by Shaheen Afridi, and Mushtaq claimed it to be out and break out into celebration in the manner that Shaheen does after taking a wicket.

While Saqlain Mushtaq continued to claim it a wicket, Shaheen refused to accept it as out, but many also supported Mushtaq’s claim.

Talking about the match, the 3rd Test match between Pakistan and Australia is currently on. As of writing this article, Australian team is currently batting and have scored 102 runs for the loss of 2 wickets after 34 overs. Steve Smith and Usman Khawaja are both batting on 41 and 47 runs respectively. David Warner and Marnus Labuschagne departed early after Shaheen got better of both of them.