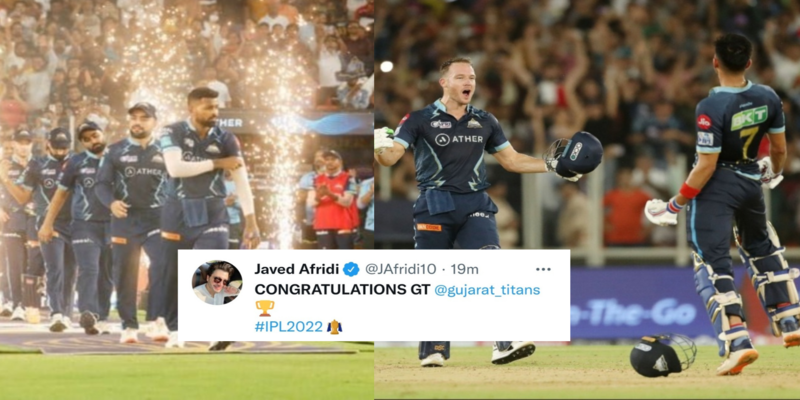 Gujarat Titans have done the unexpected. They have become only the second team in history to win the IPL championship in their debut season. Hardik Pandya and his men have registered a thumping win over Rajasthan Royals at their home ground in front of over 100,000 people. And the man who led the team to the victory is none other than the GT skipper, Hardik Pandya.

Nothing has gone in RR’s favour tonight. Sanju Samson won the toss and, strangely, chose to bat first. Although they had a steady start and both openers added 31 runs for the first wicket. But once Jaiswal got out, RR totally lost the plate and lost wickets at regular intervals.

However, Jos Buttler (39 off 35) tried to stay in the crease, but he too fell in order to increase the run rate. In the end, Rajasthan only just managed 130/9 runs in their 20 overs. Hardik took three wickets for just 17 runs, and Sai Kishore took two.Chasing the target, GT also didn’t have a great start and lost Wriddhiman Saha (5) and Mathew Wade (8) early.

But Shubman Gill and the GT skipper added 63 runs for the third wicket to take Gujarat out of misery. However, Hardik got out after playing a decent knock of 34 runs. But after that, David Miller and Gill led the Titans to victory. With this historic win, Gujarat has created history.

They have beaten every team in the competition and comprehensively won the title. Miller and Gill added an unbeaten partnership 47 runs to win the final for their team.

Congratulations #GT for an amazing debut. Hats off to @hardikpandya7 and his lads. You deserved this as you guys were in a league of your own this #IPL now look forward for next #IPL #GujaratTitans #Champions

To every player , support staff, groundsmen, broadcasters, administrators and to all fans 1\2

What a dream debut season for Gujarat Titans. @hardikpandya7 has been absolutely brilliant as a leader and player. This has been a fantastic IPL and great to see a new champion. Jos Buttler was in a league of his own and Rajasthan Royals can be proud of their season. #IPLFinal pic.twitter.com/dnTKOoAO4K

What a brilliant first season for @gujarat_titans Big big congratulations to the captain @hardikpandya7 and the team. #IPL2022

Every match they played they got a new hero. Stuff of dreams for a franchise playing their first season. Many congratulations @gujarat_titans! #IPLFinal pic.twitter.com/9LtuqYqpAM

GT @gujarat_titans showed us what it takes to win the world’s toughest T20 championship.Being debutants, they never let the pressure affect their superlative performance. Great leadership from @hardikpandya7 &
many congratulations to @Gary_Kirsten #AshishNehra. Enjoy the trophy!

He’s a leader of men! @hardikpandya7 has led @gujarat_titans by deed with bat and ball throughout the #TATAIPL #Gujarat #IPLChampions

Surprised everyone with their performance and won the IPL.

Gujarat Titans have taught all of us an important lesson of life. #GTvsRR #TATAIPL 2022 pic.twitter.com/2sm2VLmARC