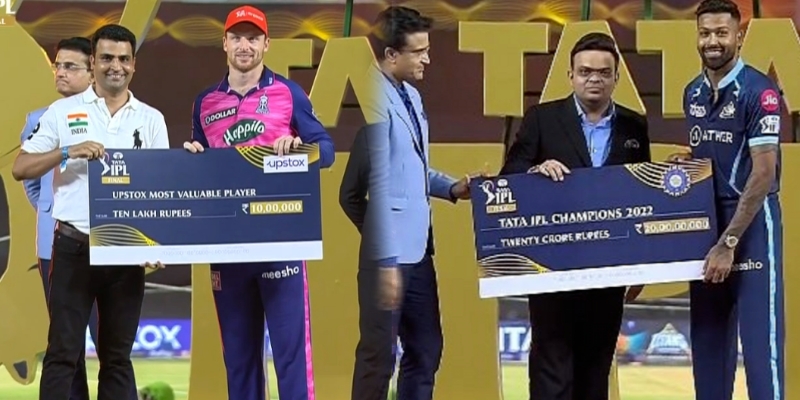 After a long 2 months of exciting football action, it is the Hardik Pandya led Gujarat Titans who won the Indian Premier League (IPL) 2022 final at their home ground in Ahmedabad’s Motera Stadium.

Gujarat Titans beat the Rajasthan Royals to win the Indian Premier League (IPL) 2022 Trophy. They were only playing their first season in the competition, as such, it turned out into a massive feat for them.

The Rajasthan Royals could only put 130 runs on the board after winning the toss, Gujarat Titans got over the line 11 balls still to be played and won the match by 7 wickets.

Today in this article to though, we take a look at all the award winners from the Indian Premier League (IPL) 2022 season awards.

Rajasthan Royals’ English wicketkeeper batsman Jos Buttler dominated the end of season award ceremony, winning near about half dozens of awards. Buttler bagged the Most Sixes of Season, Game changer of the Season, Power-player of the Season, Most Fours of the Season, Orange Cap and the Most Valuable Player award, for which, he got a prize money of 10 Lakh for each of the awards.

Butter rightly deserves all the awards, finishing as the tournament’s leading runs scorer this season, amassing a total of 863 runs, that also included 4 centuries.

Emerging Player of the Season award went to Sunrisers Hyderabad’s star pace bowler Umran Malik. The quick finished as the 4th highest wicket-taker with 22 wickets from 14 matches and caused a lot of trouble with constant pace of 150+. He has also been called up to the Indian team after his performance. Along with the Trophy, Umran also got a 10 Lakh check.

Supa-Striker of the Season: Dinesh Karthik

The Supa-Striker of the Season award went on Royal Challengers Bangalore’s wicketkeeper batsman Dinesh Karthik. Karthik played quite a pivotal role in the team reaching the IPL Playoffs.

Fastest ball of the Season award went to Champion team’s pace bowler Lockie Ferguson, who clocked at 157.3 KMPH in the Final match itself to overtake Umran Malik. He also received 10 Lakh check.

Purple Cap for the highest wicket-taker went to Rajasthan Royals’ leg-spin bowler Yuzvendra Chahal, who finished the tournament with 27 wickets to his name. He also got 10 Lakh check with the Trophy.

Catch of the Season: Evin Lewis

Catch of the Season went to Lucknow Super Giants’ Evin Lewis, who took a one handed catch of Rinku Singh in a close match to help his team secure IPL playoffs. He also got 10 Lakh as prize money.

The runners-up team of the Indian Premier League (IPL) 2022 season, Rajasthan Royals received the cash prize of 12 crore and 50 lakh.

Gujarat Titans, the Champions of the Indian Premier League (IPL) 2022 season, received a cash prize of 20 crore and the big one, the Trophy that we were all fighting for throughout the season.