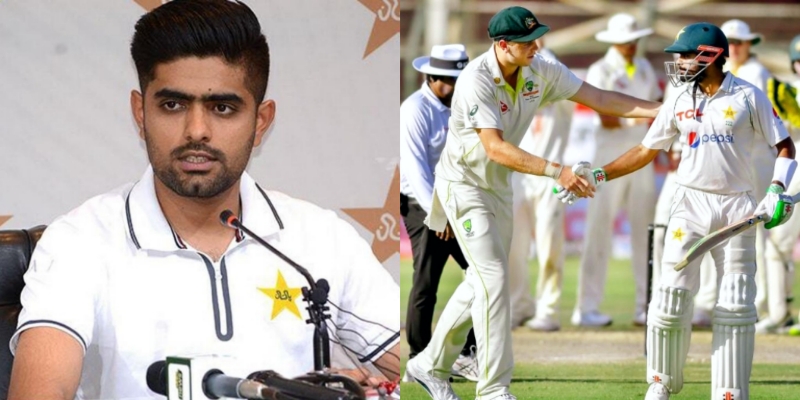 Babar Azam played the best inning of his career so far during the 2nd Test match of the 3 match series against Australia, where Pakistan captain scored 196 runs and was dismissed before completing his career’s first double hundred.

While the 2nd Test match between Pakistan and Australia ended in a quite note with criticism once again from around for the pitch, but as the days progressed, especially on the 5th day, the match took and exciting turn, where there was a small opportunity for both the teams to have a go at winning.

When the 5th day’s play began at the National Stadium in Karachi, Pakistan were still required 334 runs to win, while Australia still needed 8 wickets. Babar Azam ended Day 4 on 102 and resumed from there with that same perfection.

Australia did managed to give some shockwave to Pakistan early on, but Babar Azam and Mohammad Rizwan streched a beautiful partnership going into the final hour of the match, while there was still hope for a small go for the chase in the last hour, but Pakistan lost back-to-back wickets, including Azam’s wicket.

However, Babar later informed to the press that there never was a intention to go for the chase in the match. ESPNcricinfo quoted Babar Azam as saying, “The inning holds a lot of meaning for me, especially because the team needed it.”

He further added that the intention was to bat normally till the tea break and only if they were in a situation to chase the target then only they would have had gone for the chase, but unfortunately they lost wickets, because of which there was no chance going for the chase. He further added there was a need for the match to be saved, but he would have been at the crease and not got out, then surely would have tried to go for the win.

It was a ding-dong battle on the last day. When strike first, there were all the possibilities that they might snap up the match, but then Babar and Rizwan took control of the match and looked like they might for the win, but once Babar got out, Australia came back into the match and there was again a hope for the Aussies, but at the end, it all ended in fair and square draw.