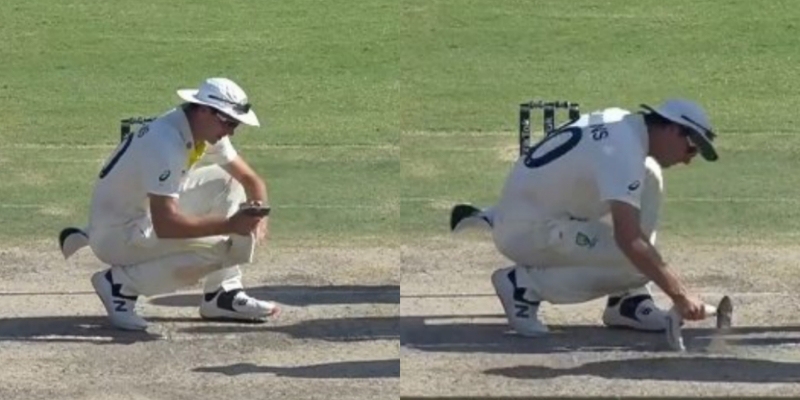 The second Test match our of the 3 match series is currently being played between Pakistan and Australia in Karachi, seems to be now reaching an exciting turn in the match.

After the first match ended in draw, hosts Pakistan have to chase a target of 506 runs to take the lead in the series by 1-0, while Australia needs to dismiss Pakistan. But among all the excitement, a video of Australian captain Pat Cummins is getting quite viral on social media, in which the pace bowler is seen working on the pitch with a hammer.

It must be noted that by the endo of the fourth day’s play of the Karachi Test, both the teams had delivered a total of 316 overs, due to which a lot of cracks emerged on the pitch, because of which, the Australian cricket team’s captain Pat Cummins was caught on camera beating the pitch with a hammer in his hand during the live match and now the video of the same incident is becoming quite viral on social media.

This video has been shared by PCB among the fans from its official Twitter account. In this video, it can be seen that during the 53rd over of Pakistan’s innings, Pat Cummins is working on repairing the pitch with a hammer in his hand instead of the ground man. As because of which, the video is getting quite viral and is trending among the fans, who are also liking and sharing it a lot.

As for the match, as of writing this article, Pakistan skipper Babar Azam is playing a heroic inning to save his team from a collapse. Currently, Pakistan is still requiring 207 runs after 130 overs of play and Babar Azam is not out for 161 runs. Pakistan have 6 wickets in hand and almost half day’s play still left.