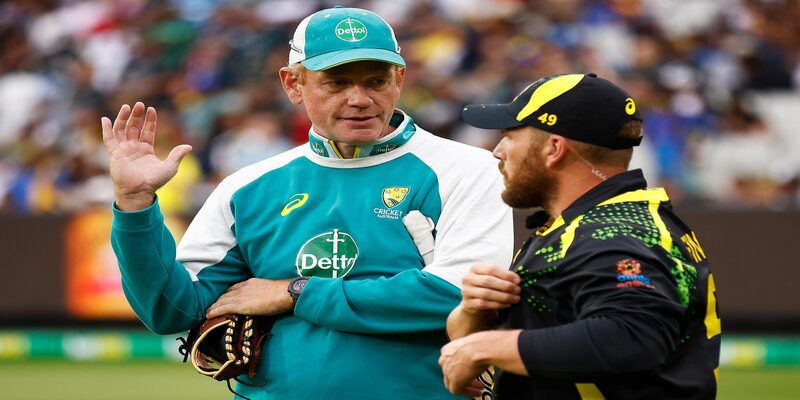 The next assignment for the Men in Yellow is a multi-format series against Sri Lanka in their own backyards. Both teams will play three T20Is, five ODIs and two test matches on that tour. The tour will kick off with a T20I match on June 07 at R. Premadasa Stadium, Colombo. As per the latest before flying to Sri Lanka, COVID-19 has hit the Australian camp.

The Australian men’s team head coach, Andrew McDonald, has tested positive for the COVID-19 virus. He will miss the first week of the Sri Lankan tour. McDonald didn’t board his flight as he has now undergone the mandatory seven-day isolation period before joining the team.

As per the quarantine, he is likely to join ahead of the second T20I match before June 8. In his absence, assistant coach Michael Di Venuto will take charge of the team. Spin coach S. Sriram and former Australian pacer Clint McKay will also assist the team for the white-ball series.

Notably, this is the first assignment for McDonald after getting the role of full-time head coach. The Cricket Australia (CA) appointed him as the head coach after the sacking of Justin Langer. Earlier, he served as the interim coach for the historic tour of Pakistan.

Former New Zealand skipper Daniel Vettori, who has been appointed as the assistant coach, will start his stint before the first Test match. It means he will start before June 29. He, along with Andre Borovec, will assist McDonald during the Test series.

The tour will kick off with a three-match T20I series from June 02 to June 11. It will be followed by the five-match ODI series starting on June 14. The ODI series will end on June 24. The tour will conclude with two red-ball games starting on June 29. The second Test will start on June 8 and Galle International Stadium, Galle will host both matches.