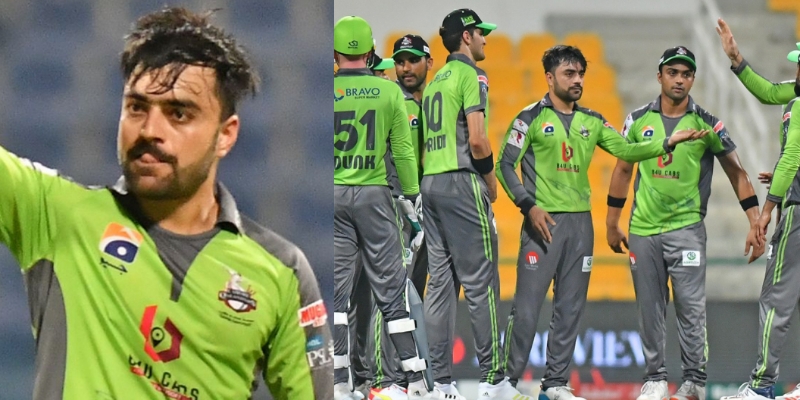 Lahore Qalandars and Multan Sultans will face off against each other in the Grand Finale of the Pakistan Super League (PSL) 2022, and many Lahore fans are currently looking out for whether their star spin bowler Rashid Khan be available for the final or not.

Lahore Qalandars managed to go past Islamabad United on the 25th February to book themselves a date with the Multan Sultans in the Grand Final of the Pakistan Super League 2022.

However, the fans of the franchise are still curious to know whether the star Afghanistan spin bowler Rashid Khan will be available for the final against Multan Sultans.

Rashid Khan had to leave the team midway through after he was called-up for national duty for the series against Bangladesh, which is currently in progress.

They were several reports that claimed that Rashid Khan may return to link up with the Lahore Qalandars for the final and then will return back to play for Afghanistan. However, the man himself surfaced a statement, claiming that he won’t be returning to play for Lahore Qalandars as national team duty is his first priority.

He took to his official Twitter account and stated that it would have been great to be part of Lahore Qalandars for the PSL final, however stated that national duty is his first priority. He signed off by wishing his team very best for the final.

It would’ve been great to be part of @lahoreqalandars and play alongside lads in @thePSLt20 final.
I won’t be able to make it for the finals due to National Duty which is always a first priority.I wish my captain @iShaheenAfridi @sameenrana and team GOOD LUCK INSHALLAH ❤️ 🤲🏻

After an interesting month of cricketing action, the Pakistan Super League (PSL) 2022 has come to its last stop, that is the final, that is to be played between Lahore Qalandars and the Multan Sultans on the 27th February.

Both Multan Sultans and Lahore Qalandars are deservedly in the final of the competition after having 1st and 2nd respectively in the PSL 2022 Points Table.

“He is a very good option at No. 3” – Sanjay Bangar names Indian player who can be backup for Virat Kohli
“I’d do a pretty good job” – Shane Warne expresses his views on becoming England’s Head Coach
To Top