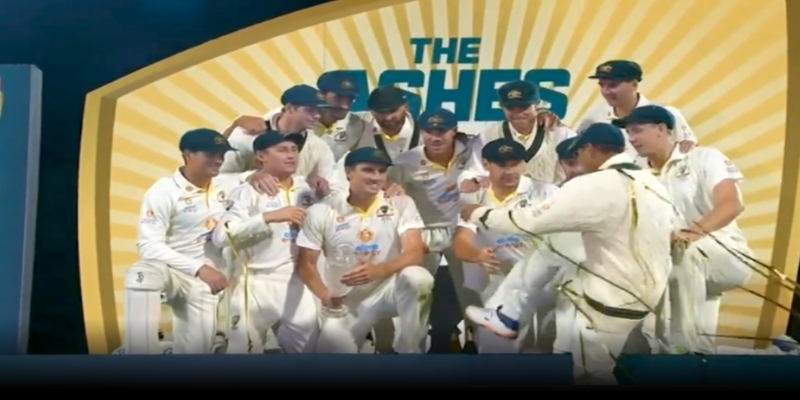 Although England had a great chance to win the game, it was Australia that came out on top in the fifth and the final Ashes Test. For the Aussie squad that had its share of controversies before the event, winning the Ashes is a great feeling. In the celebrations that followed the game, there was an incident that caught the attention of many. In this article, we take a look at the video of the heartwarming gesture by Pat Cummins to ensure that even Usman Khawaja also poses for the picture.

An incredible gesture by Pat Cummins

Tim Paine ran into a controversy a few weeks before the Ashes. He first gave up his captaincy and then decided to not play the Ashes. Hence, Australia appointed Pat Cummins as the captain. He was the first pure bowler to captain the Aussie Test Team in history. Hence, not many were sure if he would do a good job. However, the tall pacer is off to a great start. He has won the Ashes 4-0 in just his debut tournament itself. A recent video shows why he is a terrific leader.

In the celebrations after the Hobart game, Usman Khawaja stayed out due to the champagne bottle that his teammates were having. However, the Aussie skipper said his teammates to keep them aside so that Usman Khawaja can also feature in the photograph. It is a small gesture but to be aware of it after gaining a major success shows why Cummins is rated highly.

This might be a small gesture but this is what makes Pat Cummins great. He realised Khawaja had to dip because of the booze and rectifies it. pic.twitter.com/GNVsPGJhfK

The pacer is off to a brilliant start as a captain

Meanwhile, Australia has won the Ashes. The Test team is now looking strong and under an able leader, the team can fancy winning games abroad on a consistent basis. The last few months have belonged to the Australia Team, especially winning the T20 World Cup and the Ashes.