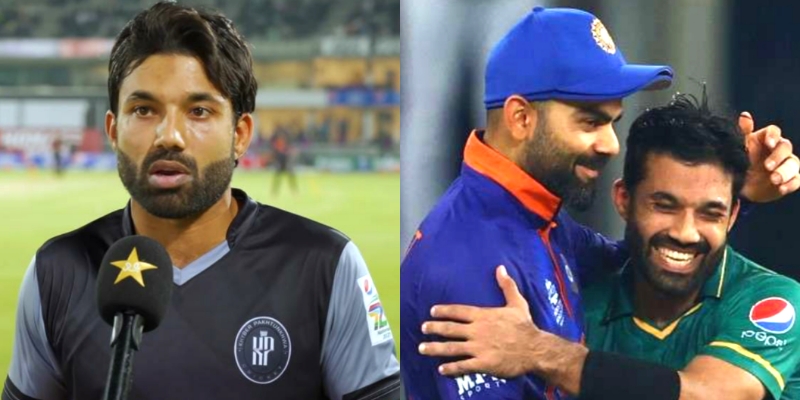 India and Pakistan’s rivalry will remain a top rivalry in the world of cricket, but inside, there is nothing but friendship among the players of the both the countries. They don’t care they are separated a Border-Line, they are always great friend outside of the cricket field.

India and Pakistan doesn’t meet in any Bilateral series anymore, but they recently faced off in the T20 World Cup 2021 held in the United Arab Emirates (UAE) last years, where Pakistan dominated the Indian team.

While talking to Paktv.tv, Mohammad Rizwan shared their stories from the India vs Pakistan match in the T20 World Cup 2022. Rizwan said that there is no doubt that Virat is number one batsman in the world.

🗣️ “All I can say is that he (Virat Kohli) is a really nice guy” : Mohammad Rizwan#Cricket pic.twitter.com/l7jcEfyrT2

He said that we India and Pakistan plays cricket, they are all like family and mentioned a incident where Pakistan took a review against Rishabh Pant and said that Virat Kohli told them whether they are trying to get them out before 10 overs, in a joking manner.

He also added that when Pakistan were batting, Virat Kohli had said few things which he can’t repeat, but said that Kohli is a nice guy.

Talking about that T20 World Cup 2021 match, it was a pure dominance by the Pakistani team, who restricted India for 151 runs and Pakistan chased the 152 runs target with all 10 wickets still in hand, where skipper Babar Azam and Mohammad Rizwan scored fifty plus scores. That was Pakistan’s first ever win against India in any ICC events.

Mohammad Rizwan had a fantastic 2021, where he finished as the year’s most run scorer in the T20I format. While, most recently, Virat Kohli stepped down as India’s Test captain after series defeat against South Africa.

Nasser Hussain Slashes Rumors That He Will Commentate In PSL 2022
Watch: Pat Cummins Asks His Team To Keep The Champagne Bottle Aside So That Khawaja Can Pose For The Picture
To Top