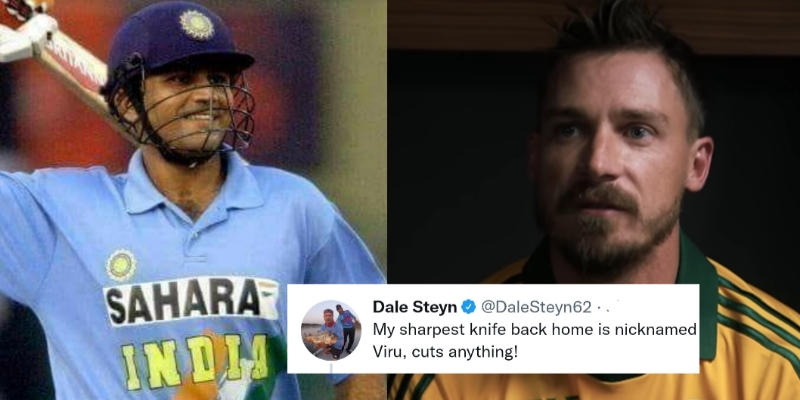 On this day (20th October), Indian cricket team’s most aggressive opening batsman till date, Virender Sehwag celebrates his birthday and one of his friend from South Africa, Dale Steyn had a special message for the Delhi born batsman, but in the return, Sehwag himself surprised him with a medicine of his own.

Virender Sehwag, who is known to the world of cricket fans for his aggressive batting while opening the inning, doesn’t matter whether it is the T20 cricket or Test cricket, celebrated his birthday on the 20th October as the veteran batsman was born on the same day in 1978.

The whole cricket fraternity including Sachin Tendulkar wished the Delhi born batsman on his special day, but he received quite an interesting birthday wish from South Africa as former South Africa pace bowler Dale Steyn had something extraordinary to say about Virender Sehwag.

The speedster posted on his social media handle that the sharpest knife at home is nicknamed Viru as it could cut anything, just like Virender Sehwag can hit any ball out of the boundary line.

Sehwag after he noticed the post, gave him a medicine of his own as he replied to that post first by thanking him and then added that he he has a camera at his home and he has nicknamed it SteynGun, because it shoots everything.

Thank you Great man. I have named my camera SteynGun , shoots anything .

The birthday boy, who turned 43-years-old, received wishes from the around the corner including Sachin Tendulkar, who stated that on the field or off the field, when Virender Sehwag is nearby, laugh and entertainment never stops.

On the field or off the field, entertainment and laughs never stop when you have Viru around.

Virender Sehwag has made a name for himself throughout his career, especially for the ability to play agressive cricket from the word get go. He had never feared to play over the players’ head even if world’s best bowlers were up against him.

Even though he is known for his agressive cricket, he hasn’t enjoyed the best of career in T20 International as he has just played 19 matches in T20I cricket and has scored 394 runs. Talking about other formats, he has played 104 Test matches and has scored 8586 runs, and has played 251 One Day Internationals, in which he has amassed a massive 8273 runs with a strike rate of 104.